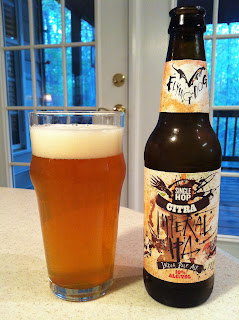 Another entry in the Flying Dog Single Hop series, this Imperial IPA is brewed to showcase the Citra hop. When the sample from the brewery arrived last week, I knew based on the name alone, that my citrus-loving palate was in for a treat.

Flying Dog Single Hop Imperial IPA with Citra pours a clear yellow-orange. The bright white head appeared quickly, and persisted as a thin layer during whole length of my drink (which admittedly was not an extended period of time.) I was immediately struck by the strong aroma of grapefruit-like citrus. Upon taking the first sip, that grapefruit juice impression was reenforced with a tingling in my sinuses. "Wow," I exclaimed, "this is interesting."

That initial citrus hit moderated as the beer warmed. After a short time in the glass, the sweet malt started coming through in both the aroma and flavor. The beer took on more of the malty aspects of a Double IPA. It was then that the warmth of the 10% ABV made itself known in the taste as well. The finish was clean and citrusy, but balanced with a hint of sweetness; like a bit of sugar on your morning grapefruit half.

I've enjoyed all of the Flying Dog Single Hop beers I've tried. This Citra-based one might just be my favorite so far, although I admit that impression could be influenced by it being the most recent. BTW, if you're a home brewer, the Citra Single Hop IPA is the featured beer for the May “Stove Toppers” homebrew kit from Flying Dog.

Note: Flying Dog sent me an unsolicited bottle of this beer. It is through my own free will that I consumed and reviewed it. No compensation was received for this review.