"Bad Guys" at the Range

I had a recent work-from-home day to wait for the Sears repairman to fix the dishwasher. Of course, he arrived 10 minutes before the end of the scheduled window. Then after 30 minutes or so he announced that the prior service tech hadn't ordered all the needed parts, and one of the replacement parts had arrived broken. The upside was since I started work early, and had no office-related interruptions, I had time left at the end of the day to hit the range!

We called up "Checkered Flag" and headed out for a sunny but chilly range trip. It was a self defense practice session rather than an USPSA practice session, but trigger time is useful no matter what. We lined up an array of bad guys using what we laughingly call the Tim Geithner targets. That designation is due to the hair style similarity, nothing more. :-) 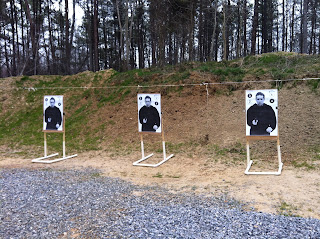 These targets are especially useful, and fun, since there are lots of aiming options. Of course, there's the body and head shot combos. There are also 4 numbered circles for precise aiming drills. There's even a small "man" printed in the upper right corner that one of our party spent time trying to obliterate with some very precise aiming.

We spent a couple hours doing drills as a group and individually. I realized that although I've been shooting a few times recently, this was the first time since January that Colleen has been able to join me. That was a long overdue date. And as we are so often wont to do, afterwards we picked up our son at home and headed out to a local pub for dinner.

The fun shooting and good food more than made up for the frustrations left after the failed service call earlier in the day.