Last Saturday I attended an practical shooting match held by Cedar Mountain Youths organization. The funds raised from the match go to supporting firearm education for young people. The event is held at a farm property used by the organization for shooting, archery, and other activities.

Six stages are set up along the sides of a 100 yard rifle range. Shooters are divided into Open, Limited and Revolver divisions. For me this was a chance to load my mags to their high standard capacity rather than the 10 round limit when I shoot USPSA. Most of the stages were fairly basic in design; consisting of arrays of targets, steel and paper, shot from multiple shooting boxes.

One simple stage consisted of just 4 paper and 2 steel targets, shot from two shooting boxes. As a twist, the course rules allowed for only 10 shots; two for each paper and one for each steel. Miss your shot on the steel plate, and there's no make up shot allowed.

Another interesting stage had orange and green painted targets added in. The stage started with unloaded gun lying on the table. At the beep, the shooter turned over a card from a stack on the table. The color turned over was the color of target to not shoot. You loaded the gun and engaged the proper targets from two widely spaced shooting boxes. 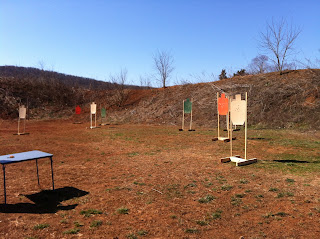 The other four stages also presented fun, but not overly complicated courses of fire. The simplicity of the stages made them very suitable for the new shooters as well as the more experienced. There were a number of folks there who had never shot a practical pistol match before and this is a good venue to introduce them to the sport. Even though the main function of Cedar Mountain Youths is to introduce young people to safe and responsible firearms use, it's apparent that local adults are benefiting as well.

The group limits participation to just 20 shooters. The small group makes for an easy, half-day match. I also appreciated that the match takes place on Saturday morning, a switch from the usual Sunday schedule of most USPSA events. The event was very enjoyable and I look forward to participating again.