I hadn't bothered to unload the target stands and other supplies from my vehicle after the unsuccessful range trip earlier in the week. So, when Friday morning arrived sunny and warm, I grabbed the gun and ammo and headed out to see if I'd have better luck on a weekday morning. Sure enough, the park was empty; just me and the geese on the pond. For the first time since the Quantico match, I was able to get in some live fire practice. 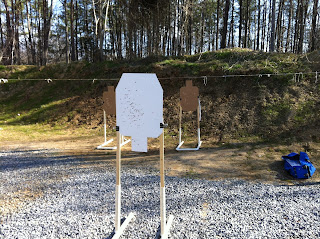 A good portion of my range time this day was spent working on my draw and first shot. I set up at about 10 yards and repeatedly drew, using a timer, and fired one shot. At the start of the practice, I noticed I was repeatedly hitting the same pasted holes in the C zone, just out of the lower left corner of the A. Putting some extra attention on keeping focus on the front sight through the shot helped with that.

I also set up one target as a barricade and practiced shooting from both sides with the targets placed so I needed to make an extreme lean to see them. I often struggle in matches with similar setups, but rarely think to practice that situation. I also put some time into strong and weak hand only shooting. The upcoming match at Fredericksburg is a classifier match, so it's a good bet that one-handed shooting will be prominently featured.

Of course, all this mostly one or two shot practice, left me itching for the fun of just letting loose with some fast shooting. So I finished up with some 10 round Bill Drills, shooting as quickly, but controlled, as possible. It's fun sure, but it's a valid training tool too!

My brief and solitary trip to the range was a great way to start off my three day Easter break. It was good to finally shoot, and to get outside to enjoy some actual Spring-like weather. And if that fun morning wasn't enough of a treat, when we arrived home from the Good Friday service at church that afternoon, I found a delivery of long backordered ammunition sitting on my porch! It really was a "good" Friday.