Practicing During the Ammo Shortage

If there's an "upside" to the ammo shortage, it's that it forces me to put in more efficient practice sessions. I know that I should have a plan in mind when hitting the range, but it doesn't always happen. Face it, shooting is fun, and it's easy to spend time "playing." Recently, I've forced myself to have specific drills in mind before arriving at the range. The upcoming VA/MD Section match is also inspiring some focused practice time.

A couple weeks ago I hit the range with 200 rounds in hand, and spent the entire session using a timer to practice a quick, reactive draw followed by two shots on target. I did this from 7, 10, 15, and 20 yards. My main points of concentration was a smooth trigger pull without losing sight focus. I paid a lot of attention to the difference in timing and acceptable sight picture at the various distances.
Goal: Better stage starts and accurate first shot.

Another recent drill was a shorter, 100 round session. Despite the low round count, I felt there were great benefits. I set up two targets and a steel plate. The first few magazines were used working on hitting the plate from the draw at 20 yards. I still need to do more work but I was very happy with the hits that day. The rest of the practice was spent transitioning between the two paper and the steel target from about 12 yards, which is a good median distance.
Goal: Accurate hits when moving between targets; on both the exit and arrival targets. And more confidence on steel. 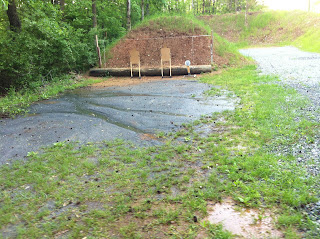 Last week I had planned a session to work on movement, but the range was muddy and under water in places. So I again set up the two USPSA targets and a low 8”steel and found "high ground" at about 15 yards. The drill was run starting with a timer, putting two on each paper and finishing with one on steel. I did 30 iterations, firing a total of 150 rounds. It was an exercise in slowing to hit the steel. I had to concentrate on making that last hit. I purposefully went extra fast on paper to emphasize the change in focus needed for the steel. The holes in the paper reflected that; about a third of the hits were in the C zone.
Goal: Adjusting speed to reflect target size and better target transitions.

All of these sessions were low round count and were done in 30 minutes or so. They were fun and, hopefully, beneficial.