To celebrate our 29th wedding anniversary, we took a drive down to Nelson County to visit a couple of brew pubs last Sunday. Our main destination was Devils Backbone Brewing Company. We arrived with the Sunday lunch crowd in full swing, and even though we couldn't get a table outside, we were seated right away indoors. Naturally, the first order of business was to peruse the beer menu. No less than twelve house beers were on tap. This was going to be a tough decision, especially since the majority were ones I've not had the opportunity to try. Devils Backbone also offers their beers in sampler flights consisting of four predetermined selections. We opted to start out with two flights, in order to try eight of the beers. The samples are small, just 2 ounces, so at the end, there's no issue ordering a full serving of your favorite. 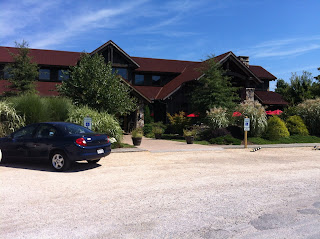 Once the flights arrived, Colleen and I had fun sipping and comparing. The beers up for our discussion were Spider Bite Wheat Black IPA, Ale of Fergus Scottish Ale, Pear Lager, Ramsey's Draft Stout, Smokehaus Rauchbier, Blue Ridge Hop Revival Pale Ale, 1949 Lager and Ichabod Crandall Pumpkin Ale. The decision wasn't made much easier by the tasting; they were all very good beers. Interestingly, and thankfully, the beers were all moderately low in ABV too, ranging from 4.4% to 6.8% ABV. Among our favorites were Spider Bite IPA, Smokehaus Rauchbier, Ale of Fergus, Ramsey's Stout, and Hop Revival. I vacillated between the Rauchbier and Hop Revival, and only making my decision at the last moment as I ordered. 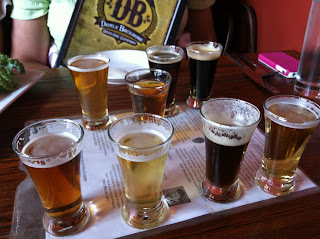 At the end of the tasting exercise, I selected the Blue Ridge Hop Revival to enjoy with my lunch. This beer is brewed with 100% Virginia grown Cascade hops, added to the brewing process while still fresh. The beer is slightly cloudy, orange-marmalade in color, with a frothy white head. The aroma is grapefruit and floral. In the flavor, the malt base and citrus and resinous hops are in good balance. The finish has some pleasant lingering bitterness. I enjoyed this one quite a bit.

For her selection, Colleen went with the Ale of Fergus. The beer was a deep, dark red color which appeared nearly black. The taste was mildly sweet with a tasty, roasted coffee and smoke flavor profile. Ale of Fergus makes a very nice session beer at just 4.0% ABV.

Oh yeah, there was food too! The food at Devils Backbone is worth the drive alone. The menu is heavy on smoked meat, all of which is smoked onsite. We started out with an appetizer plate of fried pickles. The spears were lightly coated in a spicy batter and very delicious. So good in fact, that we ordered as second helping while waiting for our main dishes. For the main course, Colleen and I both opted for "Rob's Bonedipper," a sandwich made on Toasted Ciabatta bread, with shaved house-smoked Prime Rib, bacon, Muenster cheese, and Smokehouse mayo. A cup of "jus" was set on the side for additional dipping flavor. Highly recommended! Our son chose the DB Pulled Pork Samich. This sandwich was piled very high with smoky pulled pork. After a leisurely lunch, we got back on the road to start in the direction of home.

But first, there was one more stop to make. We could have easily made three along the way stops. Route 151 in Nelson County is home not only to Devils Backbone, but also Bold Rock Cider, Wild Wolf Brewing, and Blue Mountain Brewing. Not wanting to overdo it, we passed by the first two and pulled into Blue Mountain Brewery for a quick dessert. We'll hit the others on a future outing. 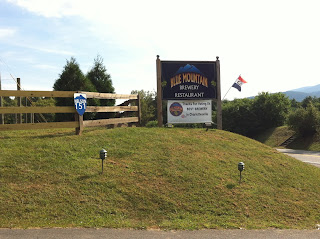 Not that we were in any way still hungry after the Devil Backbone meal, but Colleen and I both had a hankerin' for something sweet. And a chance for another good beer is always welcome. We took a table outside on the patio. I saw the brew pub had their Oktoberfest on the menu, and decided it was time for my first Oktoberfest beer of the season. Alas, when I ordered I was informed they were out of the Oktoberfest. Not sure how that happened so early. (So I'll have my first Oktoberfest of 2013 at this weekend's Blue & Gray Oktoberfest celebration instead.) I was a bit let down, but not wanting to go with any of the higher ABV beers offered, I opted for the Kölsch 151 that I've been enjoying in bottles recently. To me it seemed the draft version had a slightly more citrus profile. Colleen opted to get a glass of Rockfish Wheat. The beer is a refreshing summer wheat beer with nice bit of spiciness; once she remove the lemon slice that was incongruously perched on the rim of the glass.

We shared a couple of desserts with our beers. Colleen picked the Creme Brulee, which was a cup of tasty vanilla bean custard, with a thick, hard candy-like caramelized crust. It's hard for me to resist bread pudding, so I ordered the Evil 8° Bread Pudding. The Blue Mountain twist on this classic is interesting. The thick slices of a cake-like bread were layered with caramel sauce, chocolate, pecans and whipped cream, and served with fresh strawberries. While none of us *needed* anything more to eat, we certainly enjoyed the extravagant treats.

After a food and beer filled day, it was time to finally make the drive home. A quick stop for overpriced chain coffee gave us fuel for the pleasant drive through the countryside. It was a great day and a wonderful way to celebrate our 29 years together.