While July 4, 1776 is celebrated as Independence Day, the birthday of the United States, world recognition of our Nation was formalized on September 3, 1783. The Treaty of Paris was signed by David Hartley, of Great Britain, and three American negotiators, John Adams, Benjamin Franklin, and John Jay, and brought the American Revolution to a close. 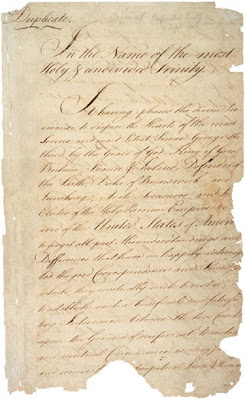 It's interesting to note that the Treaty begins with the words, "In the Name of the most Holy & undivided Trinity."

Email ThisBlogThis!Share to TwitterShare to FacebookShare to Pinterest
Links to Related Musings: Freedom, History, Independence Day, This Day In History