I've mentioned previously that I look for Heavy Seas beers when I travel outside of the Fredericksburg area. Heavy Seas, formerly Clipper City, is one of my favorite breweries, but sadly few of their beers are available locally. One of my most sought after souvenirs from the Outer Banks of North Carolina is beer from the Baltimore, MD brewery. Go figure. During our recent vacation, the beaches were closed to swimming on many of our days there due to rough water. Since I had brought along my old Heavy Seas pint glass, I frequently enjoyed Heavy Seas beer in the matching logo glass while watching the heavy seas from the deck. 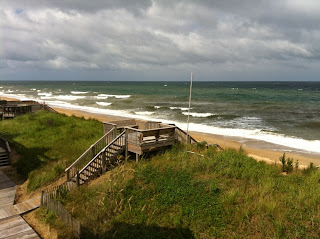 I shopped at both Chip's and Trio while we were in the Outer Banks since both stores have extensive, and varied, craft beer selections. We brought home several Heavy Seas beers. (Truth be told, I brought back so much beer I couldn't fit it all in the beer fridge.) One of those beers was Heavy Seas Powder Monkey, an English-style Pale Ale. Powder Monkey the new Pale Ale in the brewery's lineup. The beer pours a hazy amber-orange with a slight head. The aroma is grain and sweet malt, with a hint of fruit. The flavor leans towards the caramel, with honey and some nutty notes.  The hop profile is grassy and bitter. Mouthfeel is doughy and slightly oily. A mild bitterness remains in the finish. 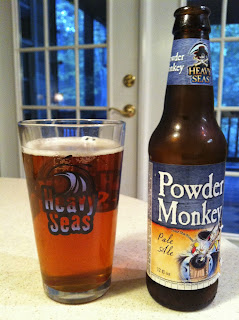 I found the flavor of this Pale Pale to be on the mild side, with the sweet malt and bitter hop aspects vying in good balance. This Heavy Seas beer might not intrigue those looking for a more hop-forward Pale Ale. However, if you like a malty influence in your Pale Ales, Powder Monkey will be to your liking.