This week's Tap Takeover & Steal the Glass event at Capital Ale House featured the beer of Stone Brewing Company. A total of nine Stone beers were offered; Levitation Amber Ale, Pale Ale, Cali Belgique Belgian IPA, India Pale Ale, Sublimely Self Righteous Black Ale, Double Bastard Strong Ale, R&R Coconut IPA, W00tstout Imperial Stout, and 17th Anniversary IPA. The first six were also available as a flight of four ounce pours. While I've had both the Pale and IPA frequently, all the other beers intrigued me, so I opted to start off with the flight. 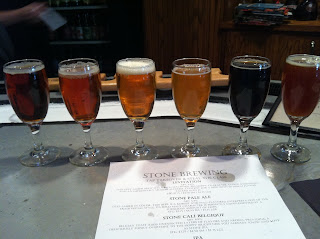 The first one I tried was the Levitation Amber Ale. This surprisingly hoppy beer was a very good red ale, the extra bit of pine and citrus hoppiness making for a very tasty brew. I commented several time wondering how I've missed this one in the past. Sessionable, at just 4.4% ABV, I think this one will be showing up in our beer fridge with some regularity. I skipped quickly through the Pale Ale and the IPA, since they were familiar. The remaining beers in the flight didn't disappoint, and I especially enjoyed the Sublimely Self Righteous and Double Bastard. However, I was quite ready for a full sized glass of *something*by this time. After tasting my samples, Colleen opted for the Cali Belgique, and our friend Checkered Flag chose a glass of Levitation.

Capital Ale House is serving some special Oktoberfest menu items this month. For my dinner I ordered a sausage platter of bratwurst with curry sauce, red cabbage, German potato salad and fried apples. German sausage and curry isn't something that I would have thought of putting together, but the spicy red sauce was an extremely tasty garnish to the sausages, and I sopped up every bit of it I could get off the plate.

Oh, and I did decide on a beer to go with my dinner, the W00tstout Imperial Stout. This 13% ABV beer is brewed with pecans, wheat, and rye, with one quarter aged in bourbon barrels. After taking a sip of this pitch black brew, the only thing I could say was, "Oh my!" It was all it was hyped up to be. Notes of brown sugar, molasses, dark fruit, and some nuttiness made for a complex beer. It was a fine sipper to wrap up the meal.

We had a very enjoyable evening of good beer, good food and fun conversation. And the Stone logo glasses we took home were pretty nice too! 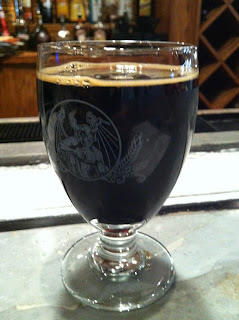