Colleen and I took advantage of our anniversary falling on a Sunday this year to squeeze in an extra Saturday evening date night. We headed downtown to J. Brian's for an early dinner and a couple beers. Perusing the beer menu I saw a listing for Honker's Ale, a beer name I couldn't place. A quick Google search on the phone informed me this was an English Bitter from Goose Island Brewery in Chicago, IL, so I gave it a shot.

The beer pours a bright, translucent copper color with a thin head. The aroma is mild with caramel and biscuity notes. The flavor is earthy, slightly sweet malt. A mild hop bitterness completes the flavor profile. The finish is clean with very little lingering bitterness. Mouthfeel is thin. At just 4.3% ABV, Honker's Ale would be suitable for multiple pints. I enjoyed my glass, but had gotten tempted by Colleen's choice of Oberon Ale from Bell's Brewing Company.

I'm generally not one to select a wheat-style beer when ordering, but after stealing a few sips of Colleen's pint, I opted to get one for myself. Bell's Oberon is a slightly hazy, straw-yellow color with a thin head. The aroma is wheat with a hint of citrus thrown in. The flavor is a subtle blend of wheat and earthy yeast, along with some hints of pepper, banana and a grassy hoppiness. Bell's Summer seasonal checks in at 5.8% ABV. 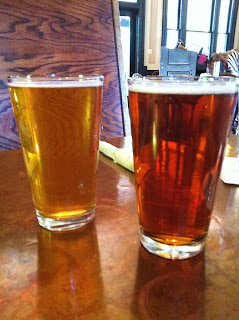 Both beers I enjoyed this evening where relatively mild, especially compared to my usual preferences. However, they both proved to be ample accompaniments to the flavorful crab drip appetizer, as well my "white pizza" entrée featuring goat cheese, sautéed onions and bacon. Good beers, good food, and most especially, the company of my beautiful wife of 29 years, made for an exceptional dinner date.