Range Time: It started out as fun

After being off the practice range for six weeks, I finally had a chance to get back out after work this afternoon. It's getting harder to get over there with the shortening days of Fall. (Is it any wonder I don't like Winter?) 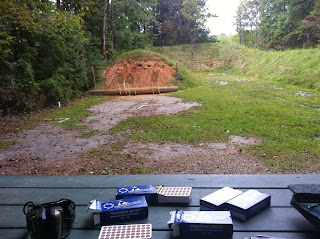 I set up three USPSA targets and worked on some shooting on the move from 15 yards to the 7 yard line. After a bit of that I got to work on target transitions, from both 15 yards and 7 yards. I was enjoying getting the splits down and accuracy up, putting two hits on each target. It was a lot fun and I was having good success. I was hitting times of 3.68, 3.45, 3.78 seconds for the six shots, in the A zone. Hardly world class, but I was pleased.

I was having fun too. And then the range official showed up. Apparently there's yet another new rule; "no rapid, controlled or uncontrolled, fire." There's no definition of "rapid," it's all subjective. I was told I was fine, in his opinion. He was just warning me that other RO's might rule otherwise. And the penalty is removal from the range, and possibly loss of membership. So there's no exact definition of "rapid," but the penalties are quite specific. I guess that's the risk of belonging to a club run by "preservationists."

Maybe that Powerball ticket I picked up this week will hit and I'll buy my own dirt berm somewhere.