Storms and an IPA

We went over to Park Lane Tavern for a mid-week dinner last evening. There were severe storms in the area but we avoided any issues during our travels. We did see a bit of excitement as a fire alarm had been sounding outside of the shops prior to our arrival, but had ceased by the time the fire department arrived. Apparently there is no central control as the fire fighters were walking from shop to shop looking around, as well driving their trucks around the area, trying to find the source. A group of them came into Park Lane to look around and we joked that the fireman with the pike pole looked like he really wanted to tear out a ceiling somewhere. Fortunately, no fires were found.

Park Lane was having a "Steal the Glass" night featuring Widmer Brothers Upheaval IPA, so I opted to pay the glass premium and try out a new-to-me beer. Widmer Brothers is known for their ubiquitous Hefeweizen, but I don't recall trying anything else from them. But of course, an IPA always intrigues.

Upheaval IPA pours a cloudy caramel orange color with a decent white head. Grapefruit citrus and pine aromas are moderately strong. The beer itself is rich with bitter grapefruit citrus. It's a pithy and resinous combination. A slightly sweet malt base peaks through, but the bitter citrus notes linger in the finish. I was surprised at just how strong the flavor profile was in this beer. I've generally written off Widmer as just another "grocery store" beer. Honestly, I didn't even think about them beyond their flagship Hefeweizen. I know now, they have a pretty decent IPA too. 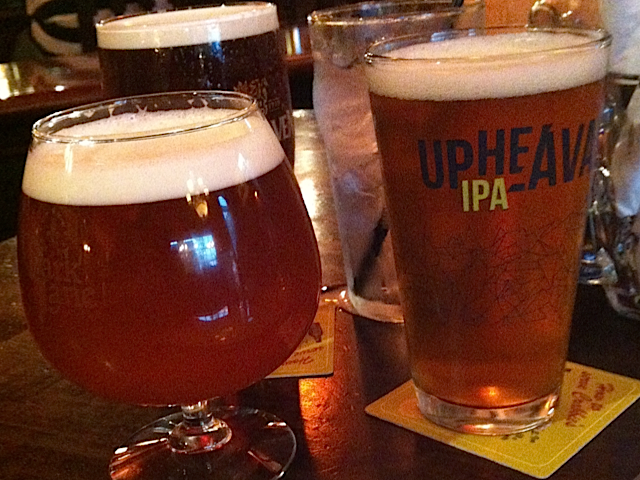 Park Lane keeps a rotating cask beer on their menu, though the wait staff should really stop introducing it as "warm and less carbonated." This evening's selection was RJ Rockers Son of a Peach, a wheat beer made with peaches, which Colleen selected. I had a small sip, and stated, "Wow, fuzzy peaches." I expected syrupy sweet, but I tasted peaches. It's not my choice in beer, but still interesting, and Colleen enjoyed it. The other beer in the picture one of Checkered Flag's favorites, and a staple at Park Lane, Belhaven Scottish Ale. And that's our son's glass of water too.

It was an enjoyable evening watching the storms pass through, while partaking in some good food and beer with family and friend. That's always a nice way to celebrate getting halfway through the work week. It's all downhill to the weekend from here!