Plans for a full vacation day on my birthday yesterday fell through, but that doesn’t mean I couldn't enjoy the day.

I had blocked off a chunk of my calendar in an attempt to avoid anyone scheduling for me something. I used some of that freedom to visit the indoor range for an hour. I had the place to myself for most of the time, which is always an added bonus. I started out shooting a few magazines through the M&P Shield. A friend had kindly adjusted the poorly installed sights and I was anxious to try it out. Success! I might actually shoot some BUG matches later this year — though I’m now without an excuse for any poor shooting. 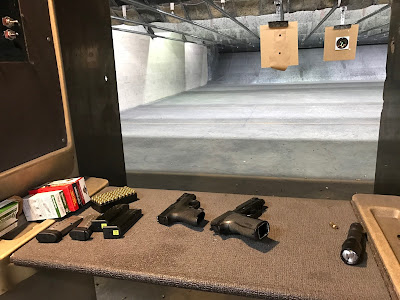 I next switched to the SIG P226 for more trials at shooting while holding a flashlight. I changed my method from what I used before and was quite pleased. Now I’m holding the light under the trigger between my two middle fingers. It feels much more stable, though the grip on the gun is a little odd. I will still need to practice reloads in dry fire.

For general practice I decided to do the 50 round Julie Golob drill at 15 yards. I was quite pleased with that drill, shot at a relaxed pace. Finally, I moved the target all the way out and did some slow shooting at 25 yards. No low hits this time. It was very difficult to see my beige IDPA center repair target against the beige cardboard hanger. At least I could somewhat make out the black aiming point in the center.

When I got back to the car after shooting, I noticed a text message from Colleen. She had been shopping again. I truly enjoy these messages from her. 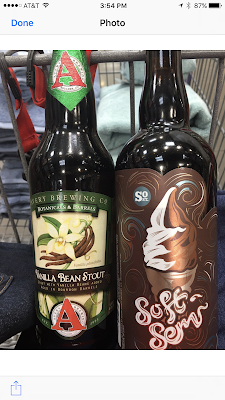 When my work day ended, we went out for an enjoyable meal. Naturally, the meal included some tasty beers. We enjoyed a couple hours sitting at one of our favorite bars and just talking. Frankly, I feel that life's been moving at a fast pace recently, so it was especially satisfying just to relax with Colleen for a while.

All good things must come to an end, but the birthday treats hadn't ended yet. There was a specially labeled delivery left at the house as well. 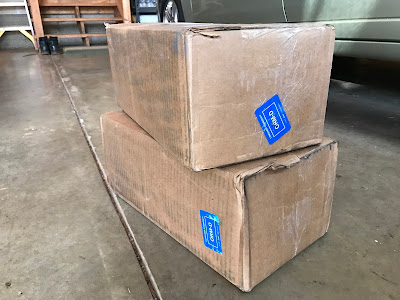 One can't fight getting older, but we can certainly celebrate marking another year on the calendar.