This month's IDPA match at Rivanna Rifle and Gun Club was held on the indoor ranges due to poor ground conditions left by the past week's snow and rain. I was actually hoping that would be the case as I haven't shot an indoor match in quite some time and wanted to get some more experience.

The first stage I shot (stage 2 of the match) had us facing a non-threat target which we knocked over to start the course. The target stand actually fell back more slowly than expected and I had my gun out and ready to shoot before it was out of the way. We put 6 hits on the first target while backing up to a barrel stack. From that position there were three more targets to be engaged with three shots each.

I was dismayed when the stage was scored to see I was 4 points down. My hits on the last targets were in good groups, but low. This stage would be my best finish of the morning.

The next stage had us facing open targets at 15 yards, all requiring three hits each. We engaged the first three while stationary, then retreated up range, around a barrel, and back down range to hit the last three targets. Again, all my hits were on target, but low.

Up next was a seated stage with six targets behind a couple of non-threats, again at 15 yards. Precision shot placement was required to avoid hitting the penalty targets. I was quite pleased to finish the stage clean. However, again with low hits, racking up the points down. By now I was getting some well-deserved ribbing from my squad mates. 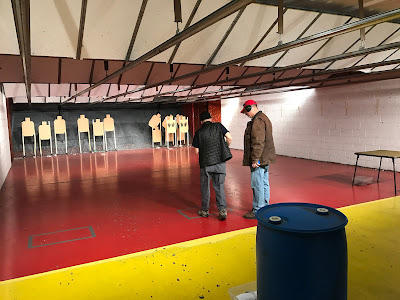 The final stage was shot one-handed. The first string of three targets was shot weak hand only, the second strong hand only. As a friend pointed out, now my weak hand shots were actually high.

I spent a lot of time thinking back on the match, and the shooting that led me to finish 24th of 60 shooters. There's a lot to analyze and consider. Was it from being tired? Was it the low light levels? Was it the way I've practiced lately? I could make a case for any, or all, of these excuses. If anything, it reminded me of back when I first switched from USPSA to IDPA and had to adapt to the -0 area being higher on the target. I just don't see the target clearly at distance and perhaps wasn't aiming high enough on that blurry beige blob in the distance.

However, in the end, it's me. I had an off day and didn't shoot as well as I believe I can. It's finally getting to the time of the year when I can hopefully get to the outdoor range, and I have some definite things to work on in practice. The match was a lot of fun, and I enjoyed myself. I always say it's a successful match when I learn something or find specific things to practice in the future. By that account, this was a highly successful match.