The Flying Dog Brewery Heat Series of spicy, pepper enhanced beers returns this year with four enticingly flavored brews. I've enjoyed several of the previous "Heat Series" beers and was excited to taste what the brewers had come up with this time. This year's additions are available in a "Hot Box" variety pack, and includes Shishito Rice Ale, Cherry Bomb Gose, Chocolate Habanero Stout, and Experimental Pepper IPA. 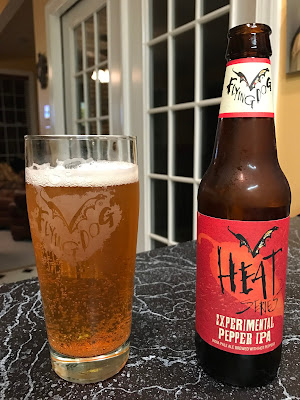 As expected I went right for the one that sounded to be the most extreme, the Experimental Pepper IPA. The beer pours a bright orange color with a bright white head. The aroma is fruity with a mild hot pepper accent. The initial sip provides a quick and brief hint of the underlying IPA, with mild citrus and fruit. The peppery heat comes quickly. It's not a brutal hit, it just seems build and roll across the palate in a wave. There's a full hot pepper flavor, but not one of discomfort.

The pepper heat lingers a bit, though doesn't build significantly over time. As I sipped my beer with some cheese, crackers, and pickled herring (don't judge) I was still able to enjoy the flavors of the food. It wasn't until a subsequent sip of beer that I would realize the previous heat had faded.

Flying Dog says the pepper used is a new variety that tops the Carolina Reaper when it comes to heat.  The brewers managed to harvest that heat and serve up the hot pepper tastiness in an manageable manner. I very much enjoyed the Experimental Pepper IPA. I'll work the three others from the box into my beer sipping schedule soon.

These beers are unsolicited samples from the brewery. All drinking and commenting is done of my own free will.