My son and I got out for another fun visit to the range this week. As I was gathering the gear, I was undecided which gun I wanted to shoot this trip. To solve that dilemma, I simply brought several! And we shot them all. 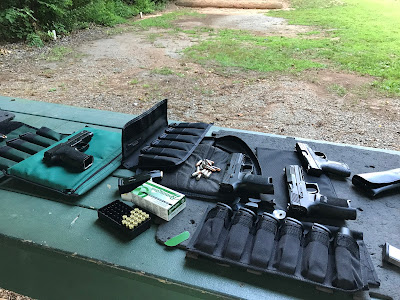 I started out shooting the S&W Shield, which I hadn't shot in a while. I used the short seven round magazines — no pinky extension — since that fits the IDPA BUG requirements. There are several opportunities to shoot BUG matches in the coming months, and I wanted to get in a bit of a "refresher." Except for shooting a tad high due to the different (from the SIG) sight picture, that went well.

Both of us spent the rest of our time switching around between the three SIG Sauer pistols. It took me a few shots to get used to the DA/SA trigger of the P226 after shooting the striker fired P320s so much lately.

It was quite an enjoyable hour. Even the temperature and humidity were at a very pleasant level, Mother Nature apparently having forgotten it's July. I am sure she'll self correct soon enough!