It's like putting on a pair of pants and finding money I didn't realize I had! While at the indoor range this week I discovered I had not unloaded all the magazines from the weekend's match. So instead of the planned 150, I got to shoot an extra 30 rounds! It really is the little things that make life fun.

This trip I started out running the Julie Golob 50 drill. After that, the remaining 100 130 rounds were devoted to working on sight alignment and trigger control on some splatter targets at 7 yards. I have mixed feelings regarding the definition of success with those drills. On one hand, I kept all the shots in the 5" circle. On the other hand, the holes were generally in the lower left quadrant of said 5" circle. 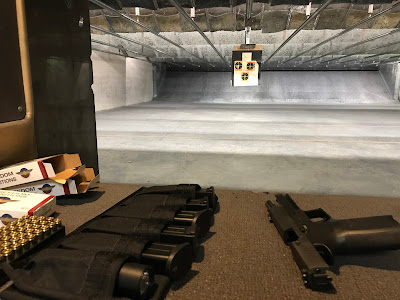 Near the end of my time I realized I was sweating almost as much as I would be if I was at the outside range as there is no air conditioning at the indoor facility. Perhaps I should stick with the outdoor range. Therein lies a conflict — shooting on the move is forbidden at either venue. However, indoors I am permitted to fire strings of more than 2 rounds. On the other hand, outdoors I can hang two targets and shoot both, but I'm limited to one round on each per string of fire. But I can draw from the holster.