Last Monday when heading out for an early dinner, Colleen, "Checkered Flag," and I decided to check out Strangeways Brewing. The brewery's new Fredericksburg location has only been open for a couple weeks, and we'd been looking forward to visiting.

We were immediately impressed by how big the place was. In comparison, the Richmond location is relatively small, but the open warehouse setting in Fredericksburg has copious seating. There's also an outdoor seating area, with its own taps. We opted for a table inside. 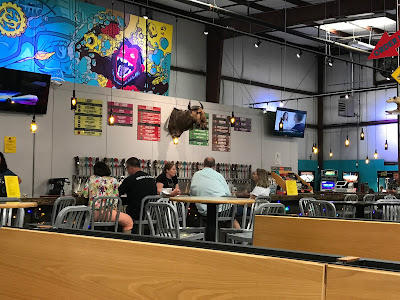 There were over thirty beers being poured, so our decision making was bit tough. Actually, it wasn't that bad, we just grabbed a flight order mat and started listing beers to try in 5.5 ounce tasters. After eight picks we decided we had a good start.

It was easy to see that our early dinner plans were going to be delayed, but we were already hungry. We grabbed a few packages of chips and nuts from the display cooler to tide us over. Strangeways offers a selection of snacks, cured meats, cheeses and salsas to go along with your beer. Food truck scheduling is also in the works I am told.

The beers we selected, in order: 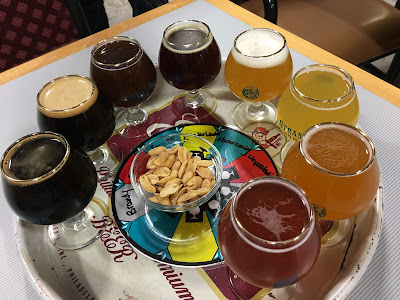 We took our time working through the tasting flight. The beers were all very enjoyable, though we all had our own opinions and favorites. The Cherry Cobbler Berliner Weisse was particularly enjoyed by my companions. I was alone in favoring the Unpretentious IPA. The Hinterlander Wild Barleywine gets its unique flavor from the addition of Brett and aging in oak barrels. I found it very tasty, although the Brett funk was a bit odd in the finish. Gelati Celesti Chocolate Decadence Ice Cream Stout evoked a few "oohs" and "ahs." Ape Armageddon Imperial Stout is a bold beer with a strong aroma and flavor, having been aged in Rye, Brandy, and Bourbon barrels. At 11% ABV it's one I'd return to linger over, perhaps with some smoked meat and cheese.

After our flight, it was time for a conversation about food. Since we were making the serendipitous outing into an event, we decided to try out a local Italian restaurant, Orofino, that has been getting great reviews. We managed to make a reservation online, but this also meant we had a bit more time to kill. To pass the time, we ordered one more round, all sticking with some lower ABV offerings; Sour Cherry Cobbler for Checkered Flag, Albino Monkey White Ale for Colleen, and I went for the Homecoming Belgian Farmhouse Saison.

Eventually we headed out to enjoy an absolutely amazing dinner, which is a story for another day. I obviously didn't get to try all the beers I wanted at Strangeways. With 96 draft lines, and 36 or more beers on tap, that's probably that's a desire that will likely remain unfulfilled. I am however, looking forward to working towards it.