Actually, it's the heat too. July's IDPA match at Cavalier featured both heat and humidity, in addition to four really fun stages. A brief rain shower right when shooting started only added to the oppressive typical Virginia summer weather. Fortunately the rain was brief, and we never had to shoot at bagged targets.

Stage 1 featured an old friend I call "Earl." This time our hapless victim was on a table where he was receiving CPR. There were three targets to be engaged strong hand only, all while our weak hand remained on Earl's chest. For the second string of the stage, we moved forward to face an array of four reduced area targets which were also fronted by two non-threats. A fifth threat target was placed to the right. All five targets required two body and one head shot each. 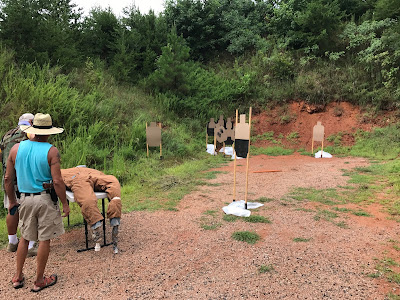 Moving to the second stage we found a complex set up of walls, barrels, a table, falling steel, and six paper targets. For the unusual start position we placed one magazine on each of three barrels and our unloaded gun on the table. The start position was in yet another place on the stage. At the start we ran to the barrels, grabbing any magazines we wished, and continued on to retrieve and load our gun. After engaging three targets, we retreated back to the start position to engage the two steel targets. From there we crossed the stage, grabbing ammo as needed, and maneuvered through a turning hallway to shoot the remaining three targets. I thought this was an extremely fun stage, offering plenty of options for the shooter. It was also my best stage of the match, with just one point down. 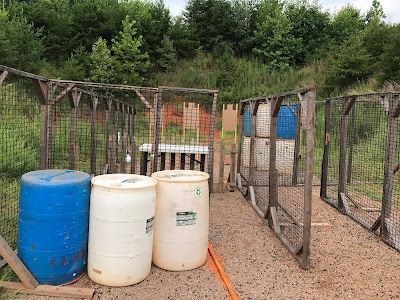 Stage 3 started with our hands on a chainsaw. There were three targets to be engaged while backing up. Finishing those targets we moved to the next position of cover to shoot two steel plates. The plates were deviously placed in front of a non-threat target. Moving to the final shooting position, we found three more paper targets waiting.

This turned out to be a disappointing stage for me. I've dealt with quite successfully with steel plates in front of non-threats in the past, and these plates were close in. Yet, I struggled to hit them. I found myself closing my weak eye, both from the sting of sweat, and out of frustration. Shooting with one eye closed actually seems to degrade my accuracy. It's an old habit, left from the Rx shooting glasses days, that I've worked to break but which sneaks in from time to time. 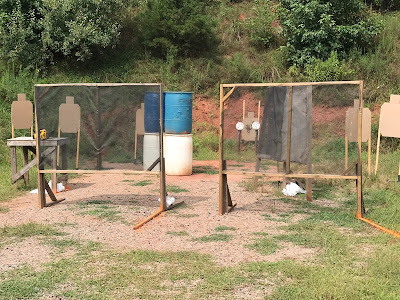 The final stage once again offered us the, um, opportunity to run. Our magazines and gun were placed on each of four barrels. We started the stage on the opposite side of the course, holding a swinging non-threat in the down position. At the start we released the swinger, and ran to retrieve gun and ammo. The shooter then had a myriad of choices on how to complete the stage. There was a wall at the barrels that hid four threat targets, at most three of which could be engaged from one end of the wall. Moving to the other end of the wall allowed the remaining target(s) to be hit. Also from the center of the stage, a target behind the still swinging non-threat was visible. To finish, a steel popper and another paper target were engaged from the last shooting position. Due to the overlap of cover positions, there was an interesting array of crossing fault lines in the center of the stage. Given the options available, it was important to have a plan, and stick with it.

The stages at this month's match were probably some of the most complex I've shot, at least at local monthly matches. They were also simply put, a whole lot of fun. It certainly disproves some critics who claim there are no options when shooting IDPA. Despite the fun, I did not finish well on this day. Between a lack of speed and some inaccurate shooting, I ended up 20th of 31Overall and 12th of 17 in SSP. However, as I've noted, it was a whole lot of fun! Now it's back to the practice range to prepare for the next match adventure that awaits.

More pics from the match here.