We were visiting in Blacksburg this weekend, which happened to be the same weekend of Christiansburg Izaak Walton League's monthly Action Pistol Match. Since I would be missing the monthly IDPA match at Rivanna, I decided to check out the Christiansburg match.

The Christiansburg Action Pistol matches use IDPA targets and scoring, and in general, follow IDPA rules. However the matches aren't official IDPA matches, so there are some liberties taken to add some interesting challenges. 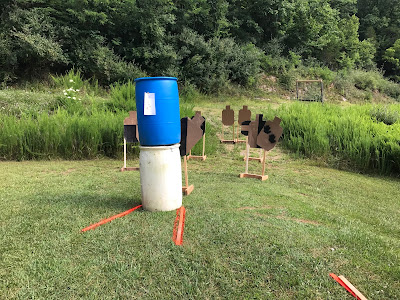 The first stage shot by the squad that I was on was a classic IDPA stage. There were two partial targets on either side of some barrels to be shot while stationary. Then while moving forward towards cover, two more partial targets were engaged. The final four targets were engaged from cover. It was a fun stage, though I didn't shoot it as well as I would have liked, or frankly, expected. Well, maybe the morning kinks are worked out.

The second stage was an all steel stage. A variety of steel was set up; a Texas Star, square plates, animal targets, a swinging hostage target, and a very, very small steel IDPA target  — 17 in all. All steel was shot while stationary. It's been a number of years since I shot a Texas Star, so that was fun. Hitting the steel "hostage" would be a hit on a non-threat adding to the challenge of the small red swinger. I didn't hit the non-threat, but used all 31 one of my rounds, and left the tiniest target standing.


The stage "Sucker Punch" offered another unique shooting challenge. The scenario was that you've been hit in the eye and knocked to the ground, losing the use of your strong-side eye. We had to use a bit of paper towel behind our glasses to block our vision in the eye, forcing us to aim with the weak side eye. The six open targets were engaged while laying on the ground on our strong side. This certainly was new challenge for me, but I was pleasantly surprised to do pretty well.

Next up was a standards stage with three targets with non-threats in between. The stage consisted of three six shot strings. The first shot freestyle from about 15 yards, followed by strong and weak hand strings shot while backing up, starting at about 7 yards.

A stage labeled "What a Drag" had us again shooting strong hand only, this time while dragging a "body." Three targets were engaged strong hand only, while dragging the body to behind cover. At that position there were three more targets to shoot after dropping the dummy. We then moved to another wall where we hit a stomp plate which activated a drop turner, before hitting the last stationary target. Interestingly, this was my best stage of the match, placing 3rd of 19 in SSP.

Our last challenge, "Who's You Daddy?" had us shooting from a seated position. We faced six targets arranged in stacked pairs. There was a target stand directly in front of us that we knocked over at the start. Once we were seated with that target blocking our view, one of the six targets was randomly marked as a non-threat by hanging a man's tie on the target.

This was a very enjoyable and challenging match in a beautiful mountain setting. The other shooters I met were exceptionally friendly too. I didn't shoot as well as I had hoped, but had a great time nonetheless. My finish was 19th of 55 overall and 4th out of 19 in SSP. I'll be sure to check the club calendar whenever I'm visiting Blacksburg to see if I can make future matches.

A few more pictures from the match are here.