Despite being able to shoot in matches the past couple weeks, the foibles of life have prevented any actual range trips for practice. Finally after work Tuesday, my son and I took advantage of the moderate (i.e., below 95°) weather to hit the range before dinner. The shaded pistol bay was pleasant enough, even though we could hear thunder far off in the distance. 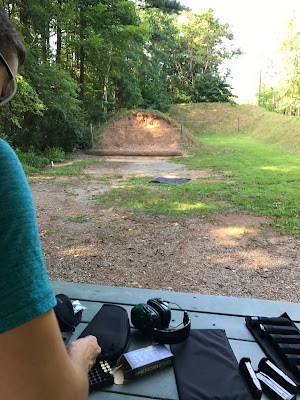 We did all of our shooting this trip from the 10 yard line. I wanted to focus on tighter shots, so much of my time was spent on head shots. I was mostly pleased with the results. A lot of those shots were taken in controlled pairs at the top of the IDPA target, or in body/head combinations.

I also expended a lot of my ammo on strong hand and weak hand only shooting. I have to say I impressed even myself with the strong hand only portion of that. 80% or more of those shots were in the -0 zone, and the rest barely out. However I was less satisfied with the weak hand shooting. About half of the hits were high right of the -0, and even a few crept into the -3 shoulder zone. I will definitely be putting in more time on that skill.

Since more than two shots in a string, as well as any movement, is now banned at the range, these trigger control focused drills help make the best use of my time, and ammo supply. It's also the area where I think I need the most work. On future trips I hope to extend the one hand shooting out to 15 yards. If I can get good hits at 15 yards, the common 7 and 10 yard shots should come easy. (Wistfully stated.)

It was good time spent with my son. We are fortunate that our work schedules pretty much coincide, so we are able to get to the range together fairy frequently. We'll enjoy that until he heads back to school later this summer.