Enjoying the Outdoors at Strangeways Brewing

After our beer exploration at Highmark Brewery, we headed over to Strangeways Brewing to continue our Saturday flavor journey. Since the Strangeways location was (sort of) on our way home it seemed silly not to. As with our previous visit, this was also a "release day" at the brewery so there was another new beer to try.

The weather was quite pleasant this afternoon so we took seats at one of the outdoor tables. Strangeways' patio is dog-friendly and we enjoyed watching the antics of visitors' furry companions. There were also quite a few families taking advantage of the weather and beer. Having made many brewery visits with our son in tow as he was growing up, we always appreciate breweries that accommodate kids, and the parents who bring them.

This day's release was the Gourd of Thunder Imperial Pumpkin Porter. I'm not a huge fan of the ubiquitous "pumpkin beer" so many breweries release this time of year. However, when I do enjoy them, it's typically one of the "imperial" versions, so I was most anxious to try this one. 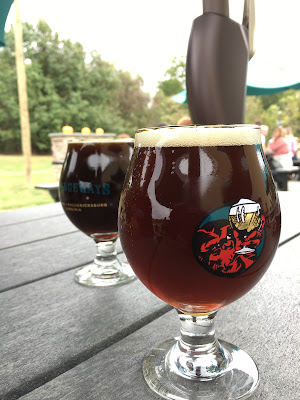 Gourd of Thunder pours a deep red-brown color, with a moderate off-white head. Aromas of nutmeg, cinnamon, and clove overlay the rich malt hitting the nose. Sipping the beer, the spices hit the palate first, but are actually muted and well-balanced. A malt base and hint of pumpkin flesh carry through in the finish. There's a touch of sweet caramel and vanilla also to be found. At 9.2% ABV, this is a pleasing sipper. I enjoyed the seasonal release very much, and regret not thinking to get a bottle, or two, to bring home. A return trip might be in order.

For her selection, Colleen opted for Gingerbread Boodwooger India Brown Ale. I got a little tongue-tied trying to order this one; the name is a variation of the brewery's popular Woodbooger Belgian Brown Ale. The spicy gingerbread spice flavoring of the beer was the prevalent, capped with a mild hop bitterness, along with hints of pepper and vanilla.

Since this was our second food truck-less stop of the day, we grabbed a bag of tortilla chips and a container of smoky salsa from the cooler. The corn chips and the hot and smoky dip went quite well with both of the beers. It made for a flavorful, if decadent, meal.