On Saturday, I made the 2 1/2 hour drive to Thurmont, MD to shoot the Potomac Grail IDPA Match. I opted to shoot in the afternoon session, and so enjoyed a leisurely Saturday morning before I headed out. The drive was pleasant and on mostly rural roads, although I did have to fight with the Google Maps app to avoid the Interstates. The weather for the match was a little warmer than I had hoped for, but it was not unbearable.

The twelve stage match (match book here) was held at the Thurmont Conservation & Sportsman's Club. This a nice facility with plenty of parking close to the bays. With one exception, the stages were set up two per bay, and the same SO crew ran each squad through both. Small squads and spacing between squads generally kept things moving, excepting when one squad got out of order, causing a cascading backup. It was a long but fun day of shooting and we completed the twelve stage match just before sunset. I enjoyed seeing friends and making a some new ones as well.

The Tier 2 match was promoted as a BUG/CCP self defense themed match. There was also a specialty division for "Carry Optics," a division that to me seems somewhat contradictory to me. A late addition was made for Stock Service Pistol (SSP) in order to increase an early low registration count. The CO and SSP shooters were limited to loading 8 rounds in their magazines to keep some parity across divisions. I shot the SIG P320 Compact in this match.

When I first looked through the matchbook, I kept thinking, "Well, that's different." There were a lot of interesting props and scenarios which were sure to keep it interesting and challenging. I was not disappointed. I heard shooters throughout the day commenting on the uniqueness of the stages. It's hard to pick my favorites, but I will describe some of the more interesting situations we faced.

In "Caught in the Kitchen" we began sitting or prone underneath the "kitchen table" with our gun on the ground near us. All shooting had to be done with our head under the table. The target placement was such that we had to shift our position between each of the three target arrays. As I crawled out from underneath after doing my walkthrough I was still unsure exactly how I was going to position myself. Interestingly, once I started shooting everything fell into place. This actually turned out to be one of my best stages, which I shot with just one point down. 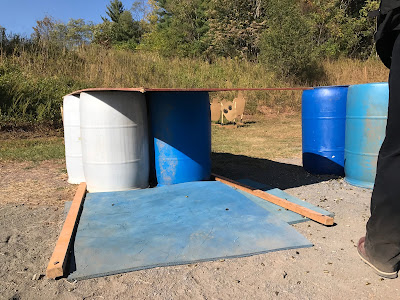 "Spear Him" required us to simultaneously knock over a target with a two-handed throat punch, while stepping on a stomp plate the activated a drop turner and a swinger. The drop turner was fast and you had to be quick drawing your gun to shoot it before it disappeared. I did manage to get my two hits on it. Four stationary targets completed the stage.

"Food Court Terrorism" began by shooting a falling popper that activated an up-and-over target. After shooting that we went prone behind a row of barrels to engage the final three targets. Shooting prone is not all that common, at least in the matches I shoot regularly, and here were two prone stages in the same match. I enjoyed the chance to do so, especially since shooting from a prone position is forbidden at my local range. 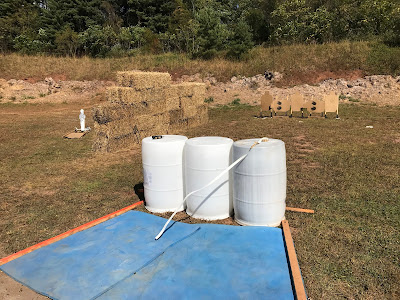 "Girlfriend’s Ex Pepper Spray" had us starting out spraying a target in the "face" using an inert pepper spray trainer. We engaged targets while retreating, and again from behind cover. "John Wick Deadly Pen" was another stage with an out-of-the-ordinary start. We began in an elbows-forward blocking position holding a pen in our hand. The run started with us stabbing the pen into the bad guy's "head" — an overripe melon. Then, running to retrieve our tabled gun we hit a stomp plate which activated a swinging non-threat before engaging the rest of the course of fire.

I always find "pick up" gun stages in IDPA to be fun challenges. I've not shot a large variety of hand guns and it's interesting to try something new, and I also enjoy the mystery of what that first, cold shot will be like. As opposed to the truly awful trigger on the pick up Taurus at the Maryland State match this spring, on "John Wick One 7 Round Mag" we picked up a really sweet Remington 1911. (I'm not a 1911 fan, but maybe a full size 1911 might be a fun addition.) We did get to dry fire the gun a few times before shooting it. 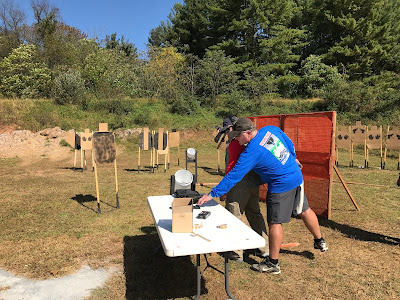 Starting with the loaded gun in our strong hand, we had to engage seven targets, one shot to each, with the 1911. We then deposited the gun in a bucket, drew our own weapon, and finished the course. The targets engaged with the 1911 were set in three arrays that were arranged in a line, but placed with just enough separation in distance to require shooting in priority rather than down the line. I bobbled a bit picking out the order while I was shooting. The other threat targets on the stage were marked with black gun silhouettes, and interspersed with black hand non-threat targets, which caused me a few second looks. I finished just 2 points down, but learned a lesson to have my planned target shooting order better in mind.

"Mine Shaft Rescue" was an indoor stage built outdoors. The course of fire was encased in black plastic tarps. A small amount of light leaked in, but the optional flashlight was essentially a requirement. I was actually looking forward to some additional experience shooting with the light, even if it was only one stage. I ended up just two target points down on the stage, but also had one hit on a non-threat. 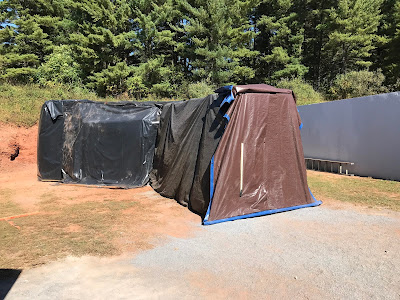 Another unusual shooting position tested us on "John Wick Shotgun Left." In this we simulated being attacked in the middle of a shotgun reload. We were required to have the shotgun slung around our neck with the stock on our strong side shoulder, holding the barrel in our support hand, loading port up, and holding a dummy round at the port in our strong hand. We had to maintain the positioning of the shot gun while engaging three targets weak hand only. This should have been a clean run for me, but despite a lot of weak hand practice lately, I dropped three points. It was still fun.

In what was likely the most talked about stage, our strong hand shooting was really put to the test in "Hurricane Rioting." For this challenge we held a ballistic shield in our support hand and at the start used it to push through a wall of four barrel "attackers," knocking them over in the process. We then engaged six targets on the move, strong hand only, while looking through the window in the shield. Arriving behind cover, we dropped the shield and reengaged the targets with two more rounds each.

This was quite a unique challenge. At one point during my advance, I got a little off balance and staggered side to side a bit. I recovered but did give the SOs a good laugh. Though finishing seven points down for the stage, I was generally pleased. Again, it showed me that I need a bit more practice with one-handed shooting, although I have no range where I can add movement to any of my practice. 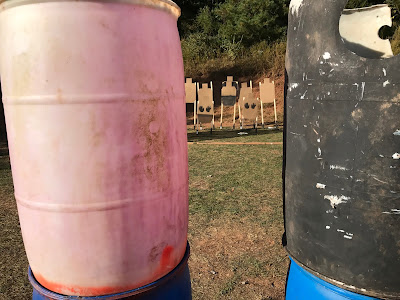 The low point for me in the match was when I had a brain synapses misfire and shot a strong-hand-only string freestyle, earning a 10 second Flagrant Penalty on one of the Standards stages. That, and the hesitations on the 1911 stage, reminded me that I need to be sure to do a final, specific, mental run through right before shooting. In both these cases, I think my mental prep amounted to "shoot them."

I thought this was an exceptionally fun match. The stages were unique in their design, and while not overly difficult, provided challenges to both the shooting and mental games. I look forward to any match opportunities since my practice time is hampered by the limits of the indoor range, and an even more restrictive outdoor range. No matter the results I look appreciate the chance to do some non-static shooting.

In addition to the stage planning issues mentioned above, I found myself shooting a bit too fast and with less concentration toward the end of the day. However, I was generally pleased with my shooting on Saturday. A finish of 14th of 30 in CCP SS was not my best, but it was not my worse either. The Potomac Grail will be my last major match of the year, though there may be a couple local matches I can squeeze in for the balance of 2017. In any event, this would make a fitting and memorable conclusion to the season.

In my book, the inaugural Potomac Grail IDPA match was a success. As originally planned, the event was to include demonstrations by local self defense trainers as well. Unfortunately those did not pan out. I do like the concept behind this match, and I certainly hope it becomes an annual event. I'll be there if it is.