Since we were out of town this weekend enjoying other interests, I missed not one, but two of the monthly IDPA matches I attend regularly. Not willing to let the lack of trigger time stand, I headed out to the indoor range at lunch today with two handguns at opposite ends of the size spectrum. 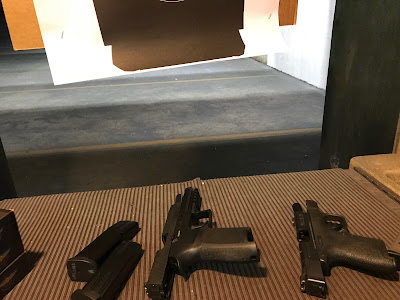 The SIG P320 Compact that I've been carrying of late has been temporarily replaced by the S&W Shield while the SIG is out for the trigger upgrade process. I decided to start out my practice session with quick refresher on the Shield using the seven round "no room for the pinky finger" magazine. I put 30 rounds down range at 10 yards, before switching to some SHO and WHO shots at 7 yards.

Being quite pleased with those results, I wiped the gun down and put it back on my belt — might as well stop while I'm ahead!

Switching to the SIG P320 Full Size, the next 50 rounds was expended in rapid 2, 3, and 4 shot strings at an IDPA -0 target set at 10 yards. Holding the larger gun right after the small Shield made the SIG seem oddly large.

Finally I sent the target carrier out to the 20 yard line to fire off my last box of ammo. The first few shots hit low, before I adjusted my grip pressure and paid a little more attention to the sight positioning as it was overlaid on the fuzzy brown blob down range. In the end, 40 of the 50 shots were within the -0 circle, with none reaching out to that dreaded -3 zone. Still, I will definitely be practicing distance shots a lot more in the future.

It was not a bad way to pass a bit of time on a Monday. And who knows, it's only Monday so maybe I'll be able to squeeze in a return visit to the range later in the week.