Highmark Brewery opened early this year, just across the Rappahannock River from Fredericksburg, in Stafford County. Somehow I hadn't even heard about the brewery until this summer, and we finally made a visit this weekend. The brewery is located at the end of an unassuming commercial building, and I've actually driven by it on several occasions without noticing. 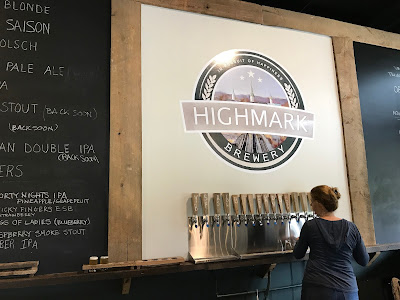 Entering the spacious tasting room, the large chalkboard listing the beer menu jumps out. With seventeen selections listed, I turned to Colleen and noted, "We have a few decisions to make." Upon closer examination, some of the beers were marked as being out. Highmark has a large selection of fruit enhanced beers; peach, blueberry, strawberry, raspberry, grapefruit, pineapple all were seen on the board. After a few minutes we had a selection of eight beers to try in our flight. 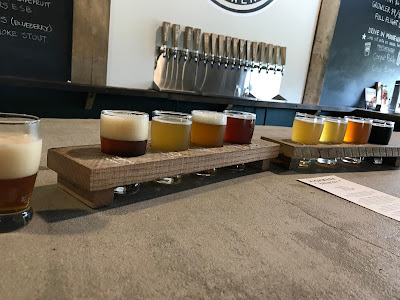 We spent some time working through the beers. We both especially enjoyed the Ginger Farm Saison and the Amber IPA. The Saison had a refreshing, moderately yeasty flavor with a hint of spice. Highmark's take on Red Ale featured a pleasing toasted malt base with a touch of bitter hops. This was my favorite of the bunch.

The Blue Stone Kölsch was the only disappointment of the beers. We felt it was lacking in the expected crispness, and clarity. The flavor was to me "soft," and seemed stale. Leaving that one behind we enjoyed all the others. Overall, the beers were decent, though on the safe side. Granted many of the beers that might be expected to have bolder flavors, the IPA's and Stouts, were unavailable during our visit.

Highmark's website features a long list of food trucks that visit the brewery regularly, unfortunately there were none on site during our Saturday afternoon visit. As we sipped our beers, we detected the aroma of something cooking coming from the back. Soon, bags of fresh popcorn were delivered to the bar, and we promptly grabbed a couple (well, three eventually.) The popcorn was popped in coconut oil giving it a wonderful flavor. That was a nice treat to go along with the beer.

There were other local beers we wanted to try during our afternoon outing, so after finishing our flight, we headed out to another brewery and more beer.