Alewerks Hop Marrow - For Both Of Us

Long time readers of these Musings will know that Colleen and I have different tastes in our "go to" beer preferences. She will most often gravitate to the dark, roasted, and chocolate flavors. The hoppy beers feature prominently on my lists. Colleen will also enjoy the strongly hopped beer on occasion, but when we're out for a meal it's the Stout section of the menu that gets her attention.

On occasion, after stealing a sip of her order, I will switch to the same beer for my next round. But the power of suggestion rarely moves in the opposite direction. While out for dinner recently, it did just that.

It so happened that on this occasion we had both gone the Stout route. Colleen was enjoying the excellent Hardywood Gingerbread Stout while I sipped a Chili Chocolate Stout from Old Bust Head Brewing. Finishing my beer I went with Hop Marrow IPA from Alewerks Brewing. 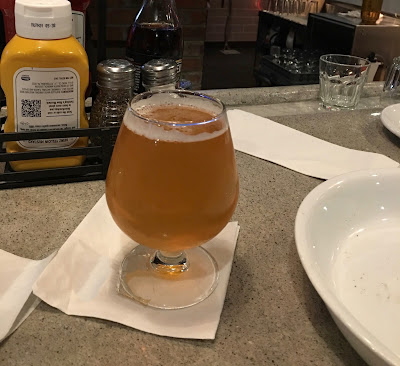 I was quite impressed with the Hop Marrow. The aroma was very strong pine. In fact I remarked, "It smells like Christmas tree." The citrus and piney hops in the flavor were delightful. After taking the requisite shared sip, Colleen noted that while she rarely has a second beer with dinner, she just might have a Hop Marrow.

Sure enough, a second glass of Hop Marrow soon was set at her place. That's high praise for the beer indeed.