I was reading an article recently where the author mentioned Talon Grips. It so happened that I had just shot my son's new SIG Legion with its highly textured gips, and had noted how much I liked the extreme texture. In fact, one of the things that attracted me originally to the SIG P226 E2 design, was the deeply textured grips on that model. Over the years I think the texture on that gun has lessened (or filled with skin.) My current weapons-of-choice, the P320 models have textured grips that are not quite as extreme.

I started doing more research on Talon Grips, including how they might affect my division choices in both USPSA and IDPA. I prefer to compete with stock guns, in the applicable divisions. Fortunately, the addition of the grip tape does not affect the gun's division standing. Being just .4 mm thick, the grips also do not significantly alter the grip size, nor is it a permanent alteration of the gun.

Talon Grips come in two versions, either with a rubber texture or a granulate texture. The granulated style is reminiscent of skateboard tape, or 100 grit sandpaper. The rubber version is slightly less extreme and is recommended for carry guns, as it it less likely to stick to clothing. I ended up ordering the rubber grips for two SIG P320's and the S&W Shield. 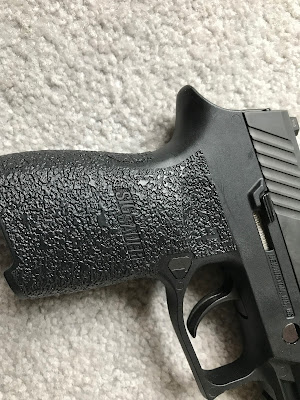 I decided to apply the grip tape first to the Compact 320. The application process was quite simple. After cleaning the gun with the enclosed alcohol pad, I removed the backing and applied the grip tape to the gun. The Talon Grips are custom cut for each gun model, and the fit is very precise. I spent some time making adjustments until I was pleased with the result. Frankly, the fit is so close to the contour of the gun that it's easy to get obsessive with having it "just right." The installation is finished by heating the tape with a hair dryer and pushing it tight to the grip frame. I repeated the heat process multiple times, pressing and squeezing until the grip was form fit to the gun and the edges seemed well sealed.

I immediately liked the feel of the new grip in my hand, but the real test comes in shooting. I was able to take the gun to the range this week for a trial run. I spent time with slow aimed fire, and also fast strings of 2, 3, or 4 shots. Simply put, I am very pleased with the Talon Grips modification. Although the textured rubber surface does not seem overly extreme, the gun feels very stable in the hand. The texture is prominent enough that I feel it, but it doesn't grate on the skin. The extra texture and "stickiness" of the rubber is especially evident when shooting one-handed. I was able to get a firm, stable grip even when shooting support hand only. 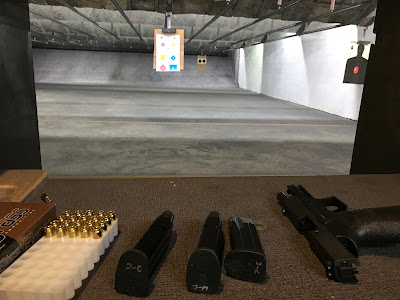 I will probably find time this weekend to apply the grips to the other two guns. I'm especially looking forward to seeing how they benefit the smaller Shield. It's an easy bet I'll be ordering additional grips for some of the other pistols as well.

I recall Talon Grips was a stage sponsor at the 2017 Delaware State IDPA match. Their grip material was used on the steps on a bridge prop. It was also a stage where I messed up my stage execution and earned a PE. But I won't hold that against them. 😀