My Christmas "stay-cation" had been so far, pew-free. Finally, on Wednesday we took a family drive down to the Winding Brook Indoor Range in Ashland, VA. This is the same facility Colleen and I visited last February. Unfortunately just a few months after we visited, the doors were padlocked by the landlord. Recently, this newly constructed range was reopened under new management.

There was a short line and a few folks on the waiting list to shoot when we arrived. The staff at Winding Brook was working cheerfully to get shooters into adjoining lanes as requested and we were assigned to our lanes without much delay.  Rather than possibly wait longer to get three lanes, we opted to share two. 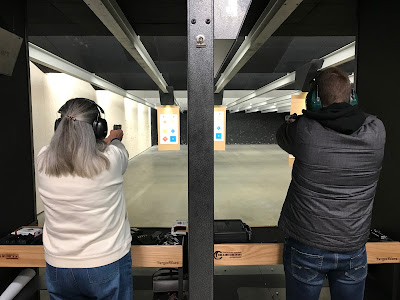 Our lane sharing arrangement worked out well as we rotated around and shot each other's weapons at various times. We used the "colors and shapes" targets during this outing. The distinct aiming points made it easy to have multiple shooters using the same target paper without needing to change as often. Most of our shooting was at 7 yards, though I did run the target out to 10 and 15 yards for a bit.

The range officer was very friendly and left folks to shoot without intrusive oversight. We observed one lady who seemed to be shooting for the first time. He gave her a quick tutorial and stepped in the help or answer questions as needed.

I was very pleased to learn that drawing from a holster is permitted at Winding Brook. I didn't take advantage of that during this visit, but it will be worth the drive to do so in the future. There are no other ranges local to me that allow both rapid fire and holster use. I've already got some drills in mind to run next time. Rifles and shotguns are also allowed at the range. The retail area and display cases are mostly empty at this time, though Winding Brook does have targets and ammo available for sale if needed.

The facility is clean, modern, and the staff seems focused on getting people in to shoot. We heard "Have fun." from the staff frequently. I lament the range isn't a little closer, especially with the alwats-horrible traffic on I-95. However given the ability to shoot at any safe speed, and use a holster, it will be worth making the trip on occasion, especially if it's a family affair.