Earlier this week, Capital Ale House in Fredericksburg hosted a Strangeways Brewing "Steal the Glass" event. As reported recently, Strangeways recently entered into an agreement to begin local distribution of their beers. Tuesday's event marked the first Fredericksburg appearance of the beers outside of the brewery. Colleen and I decided to stop in and enjoy a few good beers and some tasty food.

I've been enjoying some sour beer styles of late, so I chose the Home for the Holidays Spiced Cranberry Sour. The attractive red beer has a refreshing tart fruit flavor with a hint of spice. The low 4.2% ABV was welcome as I emptied my glass quite quickly.

Colleen started with Tirami’Zu Brew Barrel Aged Porter. I stole only a brief sip, not wanting to disturb my soured tastebuds, but I think I'll check that one out at the brewery soon. It was full of creamy dark chocolate aroma and flavor. 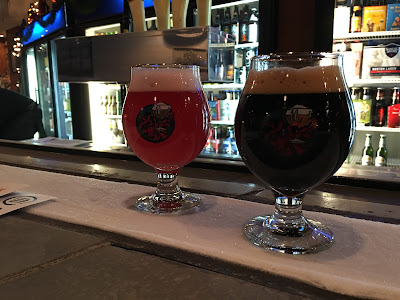 We've enjoyed several visits to the nearby Strangeways Fredericksburg location, where they keep around 40 unique beers on tap, so having just four options from which to choose made for an easier than usual decision process. For our next round, to accompany our meal, we simply ordered "the other two."

This time I sipped the Helles Frozen Lager and Colleen claimed the Überlin Berliner Weisse. The Helles had a nice crisp, grassy bitterness. A lighter bodied beer than I typically drink, it went well with my French Dip Steak and Havarti sandwich.

While we were enjoying our dinner I noticed that Capital Ale House owner Chris Holder and Neil Burton, the Strangeways Brewery owner, were also in attendance to help celebrate the new distribution status. I hadn't seen either of them for some time so took the chance say hello and enjoy a quick chat about beer in Fredericksburg.

Besides two more glasses to add to our glassware collection, we obtained a bunch of Strangeways swag as well. We enjoyed a pleasant event talking, eating, and drinking. I'm can now look forward to seeing even more Strangeways beer variety at my favorite local establishments.