Bell's Hopslam and A Balmoral Cigar

Not too long ago, I found a lone can of Bell's Brewing Hopslam Ale hiding in the back of the beer fridge. I was excited as I thought I had consumed the last of the supply I acquired in Spring 2019. Those cans were some of the last available after Bell's announced they would no longer ship their beers to Virginia.
Hopslam is an annual release from the Michigan brewery. The Double IPA at one time seemed like it had almost a cult following, and the retail price reflected the demand. In more recent years, my impression is the price had moderated somewhat. The newer distribution in cans helps to preserve the beer so those cans that get lost in the recesses of the fridge stay pretty fresh.
The beer pours a golden amber with a sticky white head. The aroma bring citrus and honey to the nose. The taste is bitter grapefruit, with a honey and fruit background. The mouthfeel is sticky and oily. It's not a beer to guzzle, but one to sip and savor. 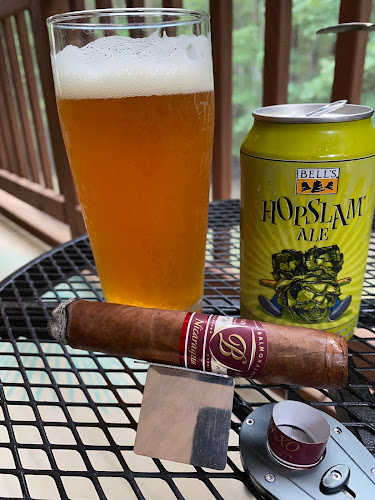 My cigar pairing this time was the Balmoral Anejo XO Nicaragua Rothschild. The Nicaraguan Habano wrapper encased a Brazilian Cuban seed binder and a blend of Dominican Republic Olor, Nicaraguan, and Brazil Mata Norte fillers. The cigar's flavors are somewhat muted by the beer's lingering remnants on my palate. The smoke brought notes of milky coffee, toffee, sweet fruit and a touch of pepper. My glass of ale lasted for about half the smoke, at which time I switched to simple water. The flavors of the medium-bodied cigar stood on their own a bit more once the beer remnants faded. Throughout the smoke, I found this to be a quite enjoyable cigar.
It doesn't appear we will be getting Bell's in Virginia again for awhile, as the legal battle around Virginia's three-tier system stretches on.
Mused by David