I don't read Twitter that often. For me, it's mainly a consolidation point from which to share blog posts, my beer check-ins on UnTappd, and the cigar pictures I upload to Instagram. As such it took me a few days to realize something was amiss.

I got an error when I tried to share the Glenlivet post but didn't think much about it at the time. Then I kept seeing the same posts at the top of my feed. At first, it didn't stand out, as there is a lot of repeated sharing on the platform. Then I noticed that the timestamps of the posts I saw had stopped on August 26. That's when I noticed that my Following count was zero, down from about 400. Well, that would explain why I saw no new content, but not why I was locked out from posting.

The mystery remain unsolved until I mentioned the issue to Colleen and she tried to view my Twitter feed. That's when I learned the account was "restricted." 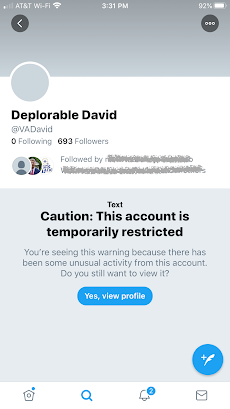 I am not sure what caused the outrage. This is a screenshot of the last post Twitter allowed. Do the censors dislike Rocky Patel cigars or scotch?

After that post Twitter blocked me from posting anything further. They also will not allow me to follow anyone. Apparently alcohol, tobacco and firearms melt the Twitter-flakes. Of course, no notification came from Twitter, and my profile page gives me notice of the restriction. I've inquired via their customer support form, but expect no support whatsoever.

Truth be told, for the past week I haven't really missed Twitter either.