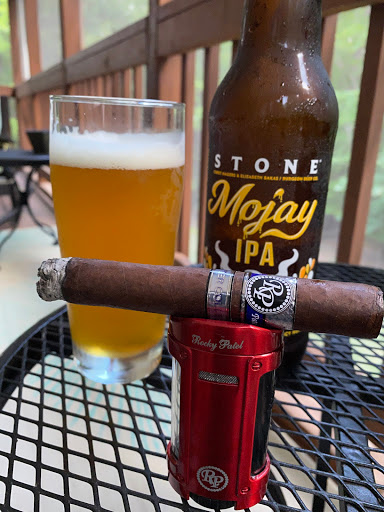 Admittedly, the bottle of beer had been sitting in my beer fridge since Stone's marketing folks sent it last year. The date stamp on the bottle was January 18, 2019 and I hoped the beer had maintained its hop profile. While I hadn't tried this beer before, it seems to have held up. The beer pours a hazy, dull orange color with a thick white head. The aroma is fruity and sweet. Sipping brings notes of bitter citrus rind, fruit sweetness, and some dank pine. Mouthfeel is sticky and the flavors linger on the palate. The name comes from the included Mosaic hops and orange juice resemblance; Mosaic + OJ = Mojay.
I had also selected a cigar for this Thursday evening, but taking a sip of the beer before lighting up, I realized I needed to consider a more bold cigar for the pairing. I returned to the humidor and grabbed a newly acquired (literally that afternoon) Rocky Patel Winter Collection in Robusto.
The cigar is a new release from Rocky Patel, and is a continuation of a season-based series released in 2008. The 2020 release features a Mexican San Andrés wrapper, a Nicaraguan binder, and Honduran and Nicaraguan fillers. The bold cigar features dark espresso, nuts, with a touch of sweetness. While it's probable the bitterness of the beer muted the flavors somewhat, I found this to be an extremely flavorful and enjoyable smoke. Despite the wind from my deck fans and the approaching storm, the excellent construction resulted in a razor burn all the way through.
My timing of the smoke was perfect, as I approached the end of the cigar, and the bottle of beer, the summer storm rolled in. My music was soon drowned out by the sounds of rain and thunder, and the blowing rain began coming through the screens. At the same time I was struck by the juxtaposition of the Winter Collection in the midst of the Summer storm. I'll look forward to lighting up another soon.
I'll get to that Oktoberfest beer soon enough.
Mused by David