A Saturday Afternoon the Brewery

I was looking through my photo journal recently and noticed it had been nearly month since I had been able to get out to 1781 Brewery to enjoy a beer or a cigar at the Olde Towne Tobacconist lounge onsite. This past Saturday presented a long-awaited "free" day so, after some chores around the house I headed out for a pleasant afternoon, to forget about the Chines virus and the government machinations to control the populations.

The first stop was to grab my drink. The brewery had several new beers on the menu since last time I was there. I eventually settled on Red Wolves IPA. I also picked up my new mug club member's mug. 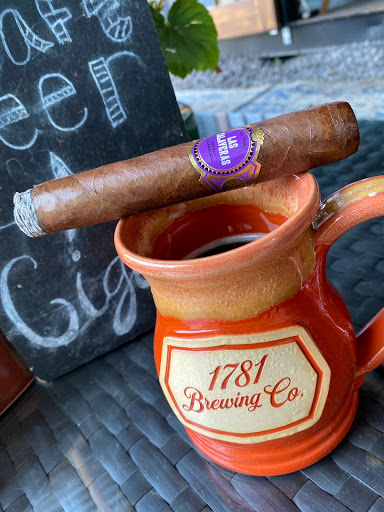 There were plenty of new selections added to the shop's humidor since I last visited. Eventually I settled on a Crowned Heads Las Calaveras. This was a cigar I had actually smoked at my last outing, but since it's a limited annual release I figured I might as well grab another. I do have a few of these, in the smaller Robusto format, in my humidor so chose the larger 6" x 56 vitola.

I enjoy a good red ale, and the Red IPA was very satisfying. There's a moderate bite of hop goodness, backed by a strong malt backbone. It paired well with the sweet earthiness and mild spice of the cigar. Fortunately the larger cigar provided time for a couple pints of the ale. It was time well-spent in enjoyable conversation with folks in the lounge.