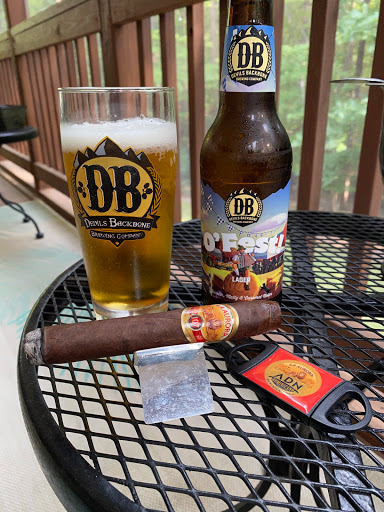 This year's O'Fest is markedly different from previous releases. Instead of the traditional Märzen-style, this year's version is a modern "festbier" brewed with Munich malts and traditional Hallertau hops. The lager pours a golden-yellow with a short live white head. The aroma has notes of bread and a mild floral sweetness. The flavor follows with lightly toasted bread, with only a hint of bitterness. The finish is clean with a light mouthfeel. It's quite a refreshing drink. While I typically gravitate to the maltier Märzens, I enjoyed this style quite a bit.
Naturally I grabbed a cigar to enjoy with the beer. The evening's choice was a La Aurora 107 Belicoso. The cigar features a brown Ecuadorian wrapper, a Dominican binder, with Dominican and Nicaraguan fillers. The flavor profile included coffee, chocolate, and leather. I found this to be a mild to medium bodied cigar. For my tastes, it came across as somewhat bland. It was a pleasant smoke, but unremarkable.
The evening was one of few lately when we experienced no storms. The temperature was unseasonably moderate, hovering right around 80°, making for a very pleasant start to the weekend.
Mused by David