A Damp and Cool IDPA Match

For just the second time this year, I was able to hit the range and enjoy a fun IDPA match. I opted to shoot the Compact SIG P320 in the Compact Carry Pistol (CCP) division at the monthly match held at the Cavalier Rifle and Pistol Club. I've only shot this gun a few times in the last two years, so it would be interesting to compete with so little practice. The day of the match was prognosticated to be wet and cool, and indeed it was. Sadly, though I'd spent the last week watching the rain percentage column of the weather app, I'd paid little attention to the temperature prediction. After a couple warm days, I was slightly underdressed for the weather, but persevered.
Our squad's first stage had us standing in a "cage" of sorts, with a low horizontal port to the front, and a vertical port on the two sides. There were two small steel poppers in the front, and two paper targets to each side. The course of fire consisted of two strings. Each string requiring us to engage one popper and one paper target on each side. The preferred method of engagement for most shooters was to step back and to one side where we could shot a close target to one side, and further one on the other, then drop down to engage a popper. I shot this stage -2. 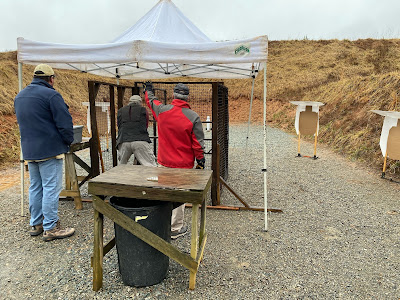 Next up, more steel. I suppose steel is a good choice for a rainy day. Our second stage had three poppers shot in the open followed by three paper targets from behind cover on either side of the stage. I was -1 on this quick stage. 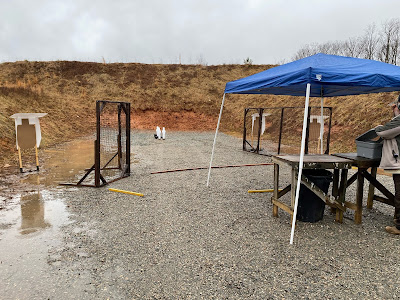 When I first walked into the next bay, I saw barrels. Just barrels. But approaching the stage, it was apparent that there were five paper targets well hidden from view behind the barrels. As one walked across the front fault line left to right, the targets came into view, but just barely. Adding to one's chances of hitting a barrel, each target required three hits each. It was a fun stage, and I must have found my rhythm at that point, and even warmed up a bit. I was -0, and even placed third overall on the stage. 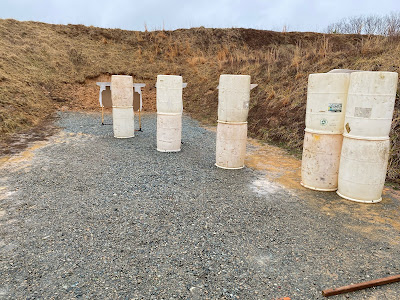 Next we shot a dreaded, to me, speed stage. I think I've had more misses on up close targets than distant targets over the years. We started with a close target requiring two body shots and one head shot, then engaged three more head-only targets with one shot each. On the first head-only target on the left, I either shot too soon, or moved away too fast and fired a miss. I even went back to look at the target at the end, and studied the target for a moment trying to see the hit, then decided there was an edge hit and called it good. In retrospect, I should have gone ahead and took a makeup shot. Instead I ended up -6 for the stage. 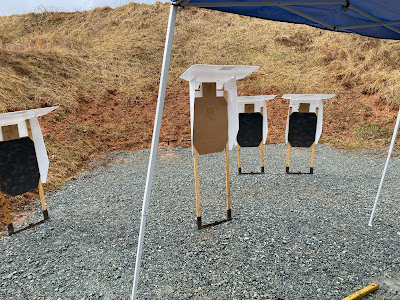 The final stage we shot started with our unloaded gun and all magazines placed on a table. There were three open targets in front of us, and four more to be engaged from two points of cover. Shooters had to decide how and when to reload or stow magazines. Shooters in most divisions chose to do a tactical reload at the table after shooting the first three targets. Since I was shooting in CCP, I had only 8 rounds in each magazine instead of the ten I was used to from shooting in SSP. Once I thought it through, I think he lower capacity was a benefit on this stage. 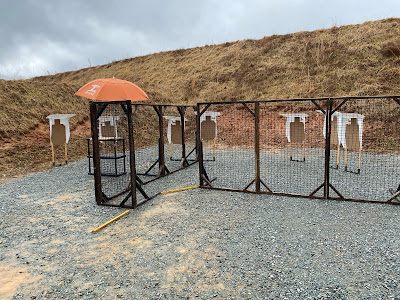 At the starting beep, I stowed one magazine, then loaded and engaged the first three targets. Shooting the lone target at the first point of cover used up the eight rounds, and I could reload on the move to the next cover position. There I shot the last three targets. This was another -0 stage, and my second best finish overall.
Despite the dreary weather, and my admitted reticence to leave the house in the morning, it turned into a very fun morning with friends. The club was using rain shields on the targets which avoided the aggregation of shooting through and pasting under plastic bags. And as a bonus, I felt generally good about my shooting. I placed 10th of 28 overall. I was the only CCP shooter among the small group of shooters who braved the weather. The round count was low, but the stages were interesting, and fun. Between the lower round count and quick stages, we were done shooting in about 2½ hours. It was a most pleasant way to spend a rainy morning.