Another Trip Around the Sun

A year ago I celebrated my first "Chinese Virus" birthday. In what would quickly evolve into a political agenda, we were just beginning the "two weeks to flatten the curve." This past weekend, a full year later, another birthday has come and gone, with little change in how we marked the occasion.

The day started with Holy Mass, after which Colleen prepared our usual Sunday bacon and eggs breakfast. Our dinner plans were for an assortment of smoked meats from a local BBQ place. Picking up our to-go order mid-afternoon, we stopped by the Starbucks to claim my free birthday froufrou coffee. Those errands complete, as we did last year, we spent the rest of the afternoon enjoying the fire pit.

I had loaded up fire pit earlier in the day, so it was a simple matter of lighting the kindling. We enjoyed the coffee while the fire progressed. About the time the coffee was consumed, the fire was going strong and I broke out the beer and a cigar. 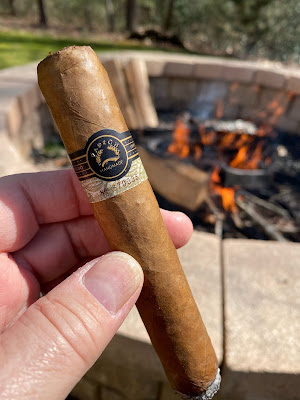 I selected a Padrón Black No. 200 Natural to enjoy for this afternoon celebration. This particular stick was a limited release included in the 2020 Cigar Rights of America variety pack. The tobaccos used in the 5½ x 56 Robusto Gordo are undisclosed. The wrapper is dull brown and on the dry side. The draw was extremely loose, with copious smoke production. The predominant flavors are dark chocolate, espresso, and a robust level of spice and black pepper. When I made the comment that I wasn't expecting the level of pepper, Colleen remarked that she could smell it in the smoke. The cigar burned well, even when I left it to run inside the house. The wrapper began blowing up heading into the last third, though I suspect that may have been caused by setting the cigar down several times on the edge of the fire pit while tending to the fire. It continued to smoke well until the final splitting near the end at the under two inch point.

Our beer selection for the day was Legend Brown Ale. This English Brown Ale is, in my opinion, an easily overlooked ale. It's the Legend Brewing beer most often seen on draft around here, but I pass it by due to its ubiquitous nature. However, I recently picked up a six-pack and, again, questioned why I don't enjoy it more often. The brown ale features a malt and nut aroma. Mildly sweet caramel, molasses, nuts and some roasted malt come out in the sipping. The finish is short and clean. It's an easy sipper and at a moderate 6% ABV, just right for an afternoon of relaxation. The slight sweetness of the beer offset the robust spiciness in the cigar.

The cigar finished, we headed inside for an early dinner. The smoked pulled pork, brisket, ribs, and chicken, along with sides of green beans, coleslaw, and potato salad made for a fitting feast. And we still have leftovers for a meal later in the week!

My was hunger satiated, but I was still in the mood for more relaxation by the fire. The sun would be up for a couple more hours, though by this time I did need a jacket. I returned outside, stirred the coals and added more wood. Soon I had a suitable fire going again and lit another cigar. 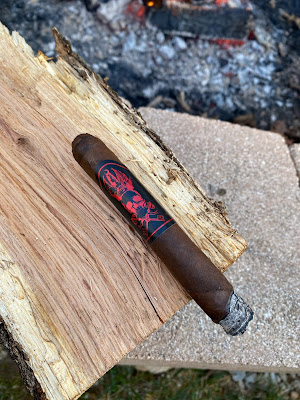 The second smoke was the Black Label Trading Company Bishops Blend. This 2020 limited release was one of my favorites from 2020. As noted in previous posts, this cigar is features an Ecuador Maduro wrapper, an Ecuador Habano binder, and a mix of Nicaraguan, Connecticut broadleaf, and Pennsylvania broadleaf filler tobaccos. The smoke is full bodied with flavors of coffee, cocoa, and some interesting dark fruit notes. Sadly, I have but a single stick left. I typically don't hoard cigars, even limited releases, but I may hold the last one for another special occasion.
We're low key people, so the low key celebration was most pleasant. I do look forward to the day when our personal freedoms are not arbitrarily limited by politicians seeking to exert control and push a political agenda under the guise of "health and safety."
Mused by David
Email ThisBlogThis!Share to TwitterShare to FacebookShare to Pinterest