Sunday afternoon was sunny and the spring allergies were tingling, but the temperature still needed "tweaking" to enjoy the outdoors. We decided to "de-winterize" the fire pit with the first fire of 2021. After clearing out some leaves, I got a fire going and settled in to enjoy a drink and a cigar.

I dug out a couple of bottles of aged Brooklyn Black Chocolate Stout for Colleen and I. These were bottles stored from 2008. We were putting away a lot of high ABV beers in those days for aging and they are most delightful now. I really should get back into that habit. The aroma coming off the glass was rich chocolate and coffee. I could detect it coming up from the glass on the table next to me, despite the smoke from the fire. The flavor was simply delicious. Creamy, dark chocolate, a touch of bitterness, with no alcohol detectable on the palate. I am going to miss these old bottles when they are gone.

The cigar selected was the Tatuaje Great Pumpkin. This stick was part of the 2020 Cigar Rights of America sampler I picked up over the winter. It is an attractive 6 x 52 Belicoso version of a cigar that Tatujae typically produces for events only, and consists of a Mexican San Andrés wrapper with Nicaraguan binders and fillers. 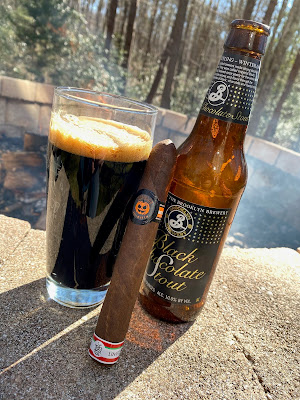 I was looking forward to smoking this cigar and had been awaiting warmer weather, and the time to enjoy what would likely be a two hour plus smoke. Initially, I got some nice but mild milk chocolate notes, with just a touch of pepper. I struggled to get a lot of smoke through the cigar, so the flavors were muted. I tried relighting its few times, but the tobacco never really got going. Sadly, after about 20 minutes I tossed the cigar into the fire. I've smoked plenty of Tatuaje cigars, and have always enjoyed them. One bad stick is certainly not a condemnation of a brand or line. These are hand crafted items, made from leaves, and every now and then one will be not be right. It's a disappointment, not a condemnation. Life's too short to fret or struggle over one cigar, so I simply moved on to another selection.

Still having plenty of afternoon left, I grabbed an Oliva Serie V Maduro Especial from the humidor. This blend is one of my (many) favorites, especially in the Torpedo vitola. 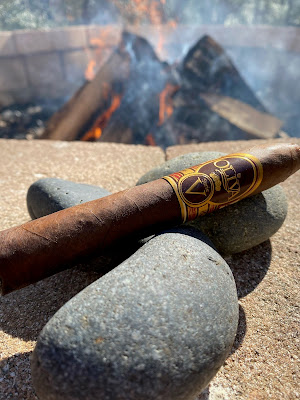 Like the Tatuaje, this full-bodied cigar has a Mexican San Andrés wrapper with a Nicaraguan binder and fillers, and is spiked with Nicaraguan Jalapa Valley ligero leaves in the filler. It produces notes of rich, creamy chocolate, with a touch of spiciness. Cedar and nutty undertones add to the flavors enjoyed. The ligero leaf serves to contribute a bit of strength. The aged beer and rich cigar made for a very flavorful and enjoyable pairing.

We enjoyed the fire for several hours. A lot of that time was spend watching the numerous birds flitting around in the woods. There were quite a number of bluebirds catching insects in the leaves, and a pair of red tail hawks possibly nesting nearby. Ah, the signs of spring…