After devoting Friday evening and most of Saturday to our son's swim meets, I was ready for a bit of shooting fun. After Mass Sunday morning, then lunch, then a trip to the grocery store, then chores, I headed out for a short break at the pistol range. (Okay you got me, I skipped the chores.)

Since there was little time left until dark, I set up just one of the 10" steel circles. Much of my range shooting is done at close distances of 10-12 feet, so I decided to work on some longer shots. The steel target is great for this as it's easy to hear the hits, which are harder to confirm on paper at a distance. USPSA stage designers like to throw in some long shots on steel, so it's a needed skill. Not to mention shooting at steel targets is just plain fun! I did most of the shooting from the 20 yard line and was making the vast majority of the hits, so I stepped back to 25 yards for a bit too. Maybe the good shooting was a gift from St. Barbara in honor of her feast day. I am sure that consistently hitting an 8" target at 20 or 25 yards off-hand may not seem like a great feat to many experienced shooters. But I can recall just a few years ago when hitting anything smaller than the berm itself at 25 yards was something I only dreamed about! I was feeling so good I even put in some good strong-hand only shots at 20 yards.

The short time at the range was both refreshing and relaxing. If there was any frustration from the day it was thinking about those matches at Black Creek Steel where the targets are often closer, and larger, where I've sometimes struggled to make the steel ring. There seems to be something about the sound of the timer buzzer going off that affects my shooting. But, maybe all the dry fire is starting to pay off. In any event it was a great way to cap off the day. Well, that and a good beer later. 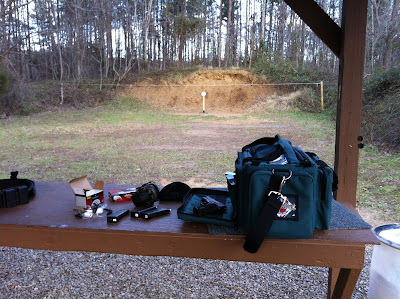