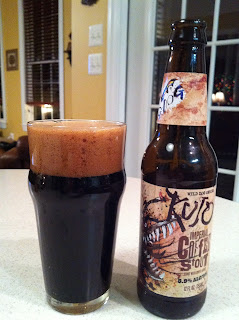 This is another look at a beer we've reviewed previously, sort of. A few weeks ago I posted a press release from Flying Dog Brewery about their "new" seasonal beer, Kujo. The name is new, the beer was previously released simply as Coffee Stout. Got it? Good. Shortly after that announcement, I received a bottle of the newly packaged beer for review.

I recall quite well the beer I reviewed last Winter. I was very much looking forward to trying the new Kujo Imperial Coffee Stout. I wondered if the experience would be the same. I am pleased to tell you, that as far as I can tell with 10 months between tastings, the beer is the same and just as enjoyable. There's the same thick mocha head. The same dark roast coffee aroma. And most importantly, the same full-flavored bitter espresso goodness.

And, like the previous review, I found my glass emptied much too quickly. But, unlike the extremely limited Coffee Stout of last Winter, Flying Dog Kujo will be making a return visit each Winter.

Disclaimer: This bottle of Kujo was an unsolicited gift from the brewery. This review written of my own free will.