Here's one of our favorite holiday desserts. After Colleen served it at one of our Christmas dinners this week, I realized I had to share with the readers of these Musings. The Hot Whiskey Sauce is practically drinkable on its own. We use Jameson Irish Whiskey in our house. 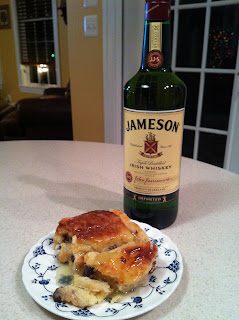 Directions:
To make the Pudding:
In a small bowl, combine the raisins and whiskey and let soak for 1 hour. Butter a 9-inch square nonreactive baking dish.

In a large bowl, whisk together the eggs, cream, sugar, cinnamon, nutmeg and vanilla. Spread one side of each slice of bread with butter. Cut the slices in half diagonally and arrange half the bread in the bottom of the baking dish, overlapping the slices. Drain the raisins and sprinkle half over the bread. Repeat with the remaining bread and raisins. Pour the egg-cream custard mixture over the bread and let it soak for 30 minutes.

Place the baking dish in a large baking pan. Add enough hot water to come halfway up the sides of the dish. Bake for 50 to 60 minutes, or until the pudding is set and the top is golden. Remove the baking dish from the water bath and let cool slightly on a wire rack.

To make the Whiskey Sauce:
In a small saucepan over medium heat, melt the butter. Whisk in the sugar, cream and whiskey. Reduce the heat to low and simmer for 4 to 5 minutes, or until the sauce thickens.

Serve the pudding warm with the whiskey sauce spooned over each portion. Serves eight.

Notes:
Put the whiskey-soaked raisins in between the bread layers only. When on the top they will easily burn during the cooking. Put the buttered side of top layer of bread UP so the top of the bread pudding becomes brown and toasted - a nice contrast to the soft inner portion.