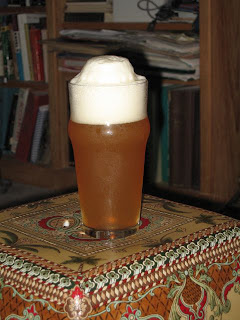 I first enjoyed Avery India Pale Ale during a trip to Denver a couple of years ago. Fortunately, it is one of the few Avery beers we can easily find locally. (Another "regular" Avery beer around here is Elle's Brown Ale.) One thing that really stands out with Avery IPA is the thick, sticky head that forms even with an easy pour. You need to pour very slowly with this one. Generally I prefer to do a hard pour on my beers and often initially forget when opening this IPA.

Avery IPA pours an attractive marmalade-orange color with a very thick white head. The head keeps growing long after the pour is finished. I poured a couple of glasses for Colleen and I, and walked away for a few minutes. When I returned the cone shown in the photo had built up. The head is thick and sticky. I have pushed it around with my fingers and stays where you put it. Of course, this makes drinking the beer an interesting experience as I often end up sticking my nose into the foamy head.

The aroma is on the mild side, with grassy hops matched by a fair amount of sweet malt. The hops really begin to shine in the taste. There's plenty of grapefruit and citrus notes that hit right away, which are then followed by a pithy bitterness. Malts come through in the finish. The mouthfeel is moderately thick and sticky, and the flavor of the beer lingers long in the aftertaste. When the glass is empty, you are left with a glass covered in sticky lacing.

Avery India Pale Ale is a nice example of an IPA. It's not extreme, but still there's enough hop kick to keep a hop head happy. At 6.3% ABV it's not quite a session beer, but it is easy enough to enjoy more than one. And you can play with it too!