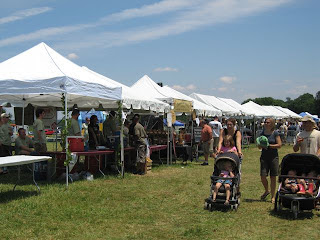 The Northern Virginia Summer BrewFest was held June 21-22 in Leesburg, Virginia. Colleen and I attended the festival on Sunday. Arriving a couple hours after the event opened for the day, the crowds were still small, but gradually grew as the day went on. We enjoyed quite a few new beers during the course of the day.

We arrived at lunch time and headed directly for the Hard Times Cafe chili stand, stopping only to fill our glasses at Williamsburg AleWerks. I opted for a Drake Tail Ale IPA, while Colleen selected their Red Marker Ale. The IPA was a nice match for my spicy chili. Now refreshed after the drive, we were ready to explore the festival grounds.

Our first stop was Hook & Ladder Brewing Company of Silver Spring. I've never had the chance to try their beers. Backdraft Brown is a smooth brown ale with an easy caramel malt and hop balance. This beer was the 2008 Washington Post Beer Madness winner. I inquired about the brewery's distribution and was told that Hook & Ladder beers are expected to be available in Fredericksburg in the coming months.

Next we moved on to the Vintage 50 booth for some of Bill Madden's creations. I had hoped to chat with Bill about his plans for The Mad Fox Brewing Company but every time I saw him he was in motion. As the driving force behind the beer festival he was obviously quite busy. I enjoyed a red ale they had on tap, though I didn't catch the official name. There was a hint of cinnamon in the aroma. The flavor was slightly bitter with some caramel malt. It was very tasty and went down easily.

Another notable stop was the Clipper City Brewing Company tent were they had a cask of Oxford Class Organic Amber Ale hooked to a hand pump. This was the only cask beer being served at the festival. Brewery representative Tom Cizauskas rigged the cask in an upright position rather than on its side as is usual, and covered it with ice to keep the beer fresh in the heat. The beer was easily enjoyed at "proper" temperature after just a brief moment in the glass. The beer has a smooth creamy mouth feel, and caramel malt taste with a bit of hop bitterness in the finish.

I also enjoyed a Brooklynator Dopplebock from Brooklyn Brewery. I arrived in time to get some of last beer being poured from a pitcher that had been filled before the keg kicked. I heard that folks were coming back multiple times for samples. This beer is not bottled, but is only available on draft. Enjoying hard to find beers is one of the benefits of attending these festivals. My pour was a bit flat, but had a creamy texture and a clean malt and dark fruit flavor.

The oddly named Hairy Eyeball Ale from Lagunitas Brewing Company was another memorable beer. This strong ale had notes of sweet caramel and dark fruits, a faint smokiness, and also a noticeable alcohol warmth. One might consider it to be an English style barleywine.

We also paid a couple of visits to the Cabot Cheese booth. We've often enjoyed the cheeses from this Vermont creamery. They have a new cheese now coming on the market. Their "Three Year Cheddar" has a rich, sharp flavor and literally melts in your mouth. We were told it's available in our area in Giant Food stores and at Costco. My prediction is that we'll be bringing some home very soon.

Besides enjoying the beer, these events provide an opportunity to meet people and talk about a mutual love of beer. Colleen and I had a nice visit with Tom Cizauskas, who also blogs at Yours For Good Fermentables. I also talked to Jim Justice of Virginia Brewing Company and met head brewer John Hovermale. Jim tells me that the brewery will be going online soon, and they hope to have beer to pour in August. I ran into Ray Johnson who organizes the long-running Blue Gray Breweriana show held in Fredericksburg each February. Ray was relaxing under the Dogfish Head tent. Ray sure knows how to pick a seat. :-) Ray's been battling some serious health issues lately, but he's in his usual good spirits. Our prayers are with him for a speedy and full recovery.

I heard that there were around 5000 people in attendance on Saturday. Sunday, even though the crowd was slightly smaller, looked to be a success as well. I'm confident the festival will continue to grow and become even more successful. One suggestion would be to provide more shaded areas where folks can enjoy their beer and visit with friends. Given the number of attendees, the heat, the beer, and the many food vendors, having ample shaded sitting areas is essential. The BrewFest is a family event and there were plenty of activities for kids as well. The crowd was well-behaved, it was easy to get your beer and to chat with the vendors.

There were some ominous looking clouds moving in as we decided to head home. We stopped for some fresh-popped kettle corn to enjoy on the way home and headed out after a very enjoyable afternoon at the BrewFest. There were plenty of good beers to be enjoyed, along with a variety of foods. I'm looking forward to the next Northern Virginia BrewFest to be held this October in Centreville.