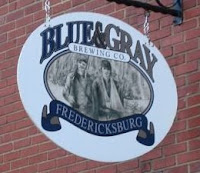 One thing I've often lamented is that in the rural/suburban area where I live, there's no such thing as a true "neighborhood pub," in the sense that it's feasible to walk to and from the local pub. When I was traveling regularly to Denver, I could get some sense of that from the close proximity of downtown pubs and my hotel. Well, that comfort still eludes me locally, but there is a local spot that gets close. Lee's Retreat is the brewpub opened last Summer by the Blue & Gray Brewing Company. Not within walking distance of home, but very close to my office, so it's becoming my after work stop.

A true brewpub, the brewery is visible through the glass wall, and the the only beers served are Blue & Gray's own. That's about as fresh beer as you can get! The food menu has a mix of typical pub grub; such as wings, burgers, or fish & chips. There are larger entrées such as steaks and ribs, and usually a chef's special or two. Last week the pub featured a steak and quail combo platter.

Being a fan of your standard pub fare, I tend to order the Spicy Blue Buffalo Wings or the Gorganzola & Bacon Burger. The wings are meaty and have enough heat to bring a little sweat to the top of my head. (That's my standard rating scale for spicy food.) The burgers are hand-formed and served on an English muffin, with crispy waffle fries. It's a very good meal.

Lee's Retreat has something else going for it besides the local beer and good food. It's a friendly place! After just a few visits, you'll be recognized as a regular by both the bartender and other patrons. And, as one would expect from your neighborhood pub, you can always see the proprietors, Jeff and Lori Fitzpatrick going about their business.

BTW, Lee's Retreat has a kid's menu, and there are usually families having dinner, so don't hesitate to bring the whole family. (It's non-smoking too.) They also will fill growlers and have bottles available to go. Maybe I'll see you for happy hour this Friday!