I don't pretend to understand what the Occupiers want. Apparently neither do they. On the Occupy Wall Street web page they admit there "is NO official list of demands." The only commonality among the participants seems to be they want free stuff. But I do understand HOW some of them want to bring about change. A Wall Street Journal poll found that one-third of those polled support the use of violence to bring about their agenda, what ever that might be.

Never wanting to let a crisis go to waste, the Europeans have taken up the occupy meme. In Rome we see the results. 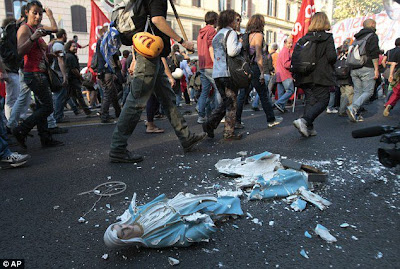 Remember how upset the left became when a Florida pastor merely threatened to burn a book valued by muslims? Apparently their feigned respect for holy symbols doesn't apply to Christianity.

This can only end badly.

On the bright side, it's a safe bet that Catholics aren't going to be rioting and beheading people over the destruction of the Blessed Mother statue.

Email ThisBlogThis!Share to TwitterShare to FacebookShare to Pinterest
Links to Related Musings: Faith, OWS, Politics, Self Defense, The Left