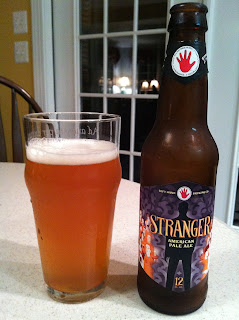 I debated over writing about this beer. I typically avoid posting reviews about beer I didn't care for, or that are just plain bad, preferring to spend my time sharing thoughts on beer I enjoy. Left Hand Stranger American Pale Ale isn't necessarily a bad beer, but also not one I found particularly tasty. It's not what I expected from this Colorado brewery. I'll post my thoughts, you decide.

Left Hand Stranger is a transparent, bright marmalade color. Even a hard pour creates only a thin, short-lived head. There is a mild floral aroma, with a bit of a soapy background. The flavor is mildly citrus but there's also a distinct sour aspect to the finish. Even for a mild pale ale, the overall flavor profile is weak. The aftertaste leaves a lingering bitterness behind. I often prepend the word "bitterness" with "pleasing" since I'm a fan of bitter finishes in beer, but there's something off here. The mouthfeel is thin, with too much tingling carbonation.

Left Hand Stranger is best described as underwhelming. I won't go as far as saying it's unpleasant, but I think my initial comment was "bleh." I've had a couple of these so far, and I'll likely finish the six-pack, but won't seek it out again. I checked some reviews on some online beer-review websites and found the feedback to be oddly varied. The ratings and comments run the gamut.

Has anyone else run had Left Hand Stranger? What was your experience?