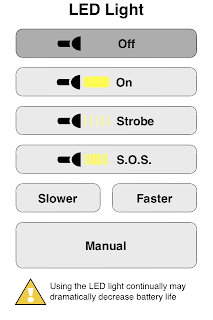 I own a couple of small, bright, sturdy flashlights. I also don't remember to carry one as often as I should. Fortunately, my iPhone 4 provides a satisfactory alternative. The iPhone has a very bright LED light that ostensibly serves as a flash for the built in camera, though I've never found it very effective for that purpose. There are several apps in the iTunes Store that make use of that light. One that I've tried and have been happy with is Flashlight by John Haney.

The main screen of the Flashlight app provides easy access to the main functions. The On and Off buttons turn the LED light on and off, of course. There are also Strobe and S.O.S functions built in. The speed of both those sequences can be controlled from this screen as well. The Manual button acts like the soft button at the end of many standard flashlights; hold it to turn the light on and release to turn it off.

The app also provides a bright white screen on the phone that can be used to light the way with older iPhones that don't have the LED light. Holding a finger down on the screen and then releasing brings up selections that are useful if you are using the iPhone screen as a light. There are pattern and color options offered. The brightness of the screen can be altered by sliding a finger up and down the side of the screen.
How useful is it? Very useful in my experiences. Despite being forgetful about my flashlight, my phone is always with me. Not to long ago I was as the range until dusk. When I left it was too dark to see the dials in the combination lock on the property's gate. Flashlight to the rescue. One more than one occasion I've been able to find my way down long dark driveways when visiting friends and neighbors. I've found my way to candles and standard flashlights during power outages. And the LED light is indeed bright enough to hinder the vision of nearby persons; something I confirmed personally by accident while working on this post! I keep the app on the main screen of my phone for quick access.
While it's not a perfect replacement for a small defensive flashlight, the free Flashlight app with iPhone 4 makes an acceptable replacement in a pinch. And it's always there.

Email ThisBlogThis!Share to TwitterShare to FacebookShare to Pinterest
Links to Related Musings: iPhone, Self Defense, Tools