While in Longmont, CO, my GPS led me on a somewhat circuitous route to the company office. However, that turned out to be a good thing as it took me right past the Left Hand Brewing Company. I hadn't yet researched the specific addresses of local breweries so was pleasantly surprised to see this, and made note of the location.

I returned later in the day, specifically hoping to try the Nitro Milk Stout. I had read about the new bottled distribution of this beer, but really wanted to taste it "fresh." The brewery's tasting room offers both indoor and outdoor seating. I chose a place at the thick, stone-topped bar. I noticed the array of 12 tap handles, two offering beers on nitro, including the Milk Stout. There was also one beer on hand-pulled cask, the Good Juju Ale. I ordered my Milk Stout and waited patiently for the proper pour to be completed.

The Nitro Milk Stout is delivered with a thick, cascading nitro-infused head. There's a pleasant and mild roasted aroma and the mouthfeel is very smooth and creamy. The flavor is that of mild, roasted coffee tinted with sweet chocolate notes. A touch of roasted bitterness lingers in the mouth. Left Hand Milk Stout is a smooth, creamy beer by its nature, but serve it on nitro and it becomes a dessert-like treat.

It was tough to decide what other Left Hand beers to try during my brief visit. Many Left Hand beers are available in Virginia, but having a beer on draft, at the source, beats a well-travelled bottle any day. I was seated right in front of the row of taps, so I could see what others were drinking. Polestar Pilsner and 400 Pound Monkey seemed to be quite popular, and I opted for the latter. 400 Pound Monkey is an English IPA that pours a bright orange color with a thin white head. The aroma is sweet fruit and bread. The flavor is slightly sweet with white fruit notes — apples, grapes, with a hint of caramel. Very enjoyable.

The beer board listed another beer that intrigued me, Fade To Black Vol. 3. Described as a Pepper Porter that's brewed with multiple varieties of chili peppers. I asked for a small sample to try. The beer looked like a standard dark porter. The flavor was rich with dark roasted malts with a mild smokiness. After I swallowed my first sip, I thought "Oh, that's tasty, but where is the chi..." That's as far as the thought went when the peppers made their appearance. I first noticed the chili warmth in the back of my mouth, then even up to my sinuses. Nothing overwhelming, or unpleasant at all, but definitely there. So another sip to confirm. After that I could note the mild roasted peppers in the taste, however the chili notes really shine in the finish, along with some bitterness. I found this to be a surprisingly enjoyable flavor combination. Another time I may try a full pint to see if the the enjoyment lasts, or if it's a few sip novelty.

The Left Hand Tasting Room seemed to be a quite popular after work stop for local residents. Almost everyone appeared to be "a regular" and many folks simply walked up the bar and received their known favorites. There was a neighborhood feel to the place, and service was quick and friendly. It was hard to tear myself away, but I had another local brewery to visit as well, and my time was limited. 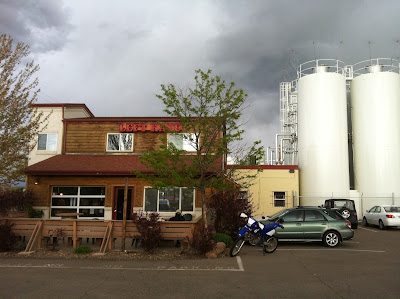