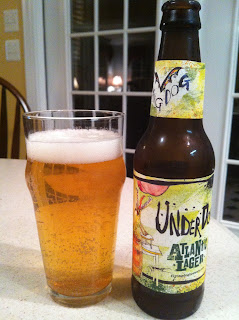 I received this bottle of Flying Dog UnderDog Atlantic Lager a couple weeks ago and have been looking forward to trying it out. I was interested in seeing (tasting) how Flying Dog would interpret the American Pale Lager.

UnderDog Lager pours a clear, straw yellow; almost cider-like. The bright white head quickly drops to a thin layer. The beer is moderately carbonated. Yeast and wet straw make up the aroma. The taste exhibits bitter, grassy hops with a bit of sweetness. It finishes dry with some lingering bitterness.

I haven't had an American Pale Lager in quite some time, so I have little with which to directly compare the Flying Dog version. I typically wouldn't select the style as a first choice, however, I can see drinking this again. At just 4.7% ABV it doesn't quite qualify as a session beer, but it's not a "big" beer either. It would be a refreshing drink after mowing the lawn, or at an outdoor summer party with friends.

This new addition to the Flying Dog line will be a year-round offering, and available where other Flying Dog beers are sold. Given the typical pushing the limits nature of so many Flying Dog beers, I find it interesting that they are making what could be seen as a move to attract the typical, American non-craft beer drinker.

Disclaimer: This bottle of UnderDog Lager was an unsolicited gift from the brewery. This review written of my own free will.