A Couple of "Big" Beers

So, it was only Tuesday. Why save all the fun for the weekend? If your life is like ours, weekends are usually too busy for relaxing over good beer anyway. Since we had a free evening, Colleen and I invited Checkered Flag to join us for dinner and beer at Capital Ale House. There was no Steal the Glass night or other promotion going on, but I had my eye (and tastebuds) set on trying a couple of special tappings I'd seen announced on CAH's Facebook page.

First up was a Stone Brewing collaboration, 10 Barrel/Bluejacket/Stone Suede Imperial Porter. Colleen and I both let out a quiet "Ooh" as the beers were set in front of us. I picked up the molasses and dark coffee aromas right away, even before I lifted the glass. It was a test of patience while Colleen grabbed the requisite photo. Yes, the beer tasted as good as it smelled and looked. It presented a complex blend of flavors, and I was hard pressed pick out a dominant trait. Roasted malt, milk chocolate, dark fruits combined with a touch of honey sweetness made for a rich porter. The mouthfeel was smooth and creamy, with a slightly sticky, but otherwise clean finish. At 9.6% ABV, Suede Imperial Porter is a sipper, one to slowly enjoy. 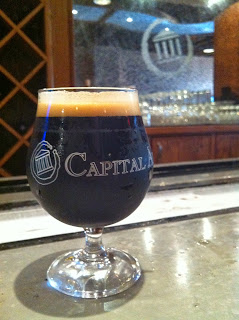 By the time we ordered dinner, my glass of Suede was empty. The second beer I planned to try was Green Flash Green Bullet Triple IPA. I'd heard mixed reviews of this one, but being a hop fan I knew I wanted to try it. I hesitated though as it was quite a different beer than the Imperial Porter I had just enjoyed. After consulting with the helpful gents behind the bar, I decide to stick to my plan.

The Green Bullet had a pleasant citrus and pine aroma. That's what I was hoping for — I was in the mood for a citrus-rich DIPA, not a sweet one. The flavor didn't disappoint either. Rich grapefuit and orange citrus was capped by a bit of resinous hop bitterness at the end. I was quite surprised at how smooth the beer was. Despite the bold hop flavors, the beer didn't overwhelm the taste buds. I'm a big fan of "in your face" beers, but was still pleased that this one wasn't in that realm. The finish was amazingly clean, with very little aftertaste left behind. That the beer checks in at 10.10% ABV is quite hidden and the alcohol is very well masked. But don't be fooled, sip this one with respect.

I paired my Green Bullet with a favorite dish from Capital Ale House, the Stuffed Pretzel sandwich. A split and grilled kielbasa is served with melted Havarti cheese, sauerkraut and sweet mustard on a soft pretzel roll. The accompanying fries were served with a spicy mayonnaise. The rich food flavors all holding their own against the citrusy beer.

My "big beer" evening was quite enjoyable. It was fun spending time chatting with Colleen, a friend, and the folks at Capital Ale House. But like all good things, the evening finally came to an end. I will admit that I slept very well that night.