Quick, check the calendar. Is it really October? It sure didn't feel like it based on the 90° temps, and humidity to match, that we experienced at this "Fall" match on Sunday. Despite the unseasonably warm weather, the match was a lot of fun. Six field courses, plus one Classifier stage, were set up to create a very challenging event.

Our squad started on "Pit and the Pendulum". This course of fire featured the swinging bridge that gets dragged out for matches with some regularity at the Fredericksburg club. After engaging three targets from the starting area, the shooter ran onto the bridge to engage a couple of targets from the unstable platform. Allowing the bridge to stabilize, and then swinging smoothly to the next target minimized the movement. Leaving the bridge was a bit tricky as it absorbed your forward momentum. After hitting solid ground, there were a couple of Pepper Poppers and swinging target that appeared, upside down, in front of the shooter. 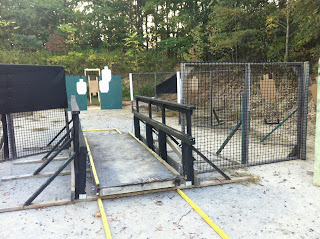 The next stage I shot had a name that evoked a smile from me, "Oktoberfest." You started the stage with your strong hand holding a stein (of water) that was set on a barrel mid-stage. Apparently a number of my squad mates were familiar with my fondness for brewed beverages, as I took some ribbing on this one. You could hit a couple targets from the start, including a tight shot between two no-shoot targets. A quick detour out of the shooting area to hit a stomp plate released a swinger hidden behind a wall, that the shooter engaged later in the course of fire. This stage also added the twist of requiring three shots on each target, rather than the usual two. 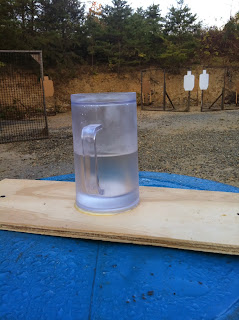 "Hide and Seek," was appropriately named. Targets were strategically placed such that the shooter had to use most of the large free fire zone to find them all. There was a couple of Pepper Poppers that barely made themselves visible around the walls. Interestingly, I had one-for-one shots on those tight poppers. It was an open target that I managed to "Mike."

"Yes You Can," offered a challenge of having two clamshells activate from a single Pepper Popper. The targets exposed, then hidden by the rising no-shoots, were set far enough apart that the shooter had to choose one or the other to engage. Of course, at rest the targets left only head shots exposed. Some shooters chose to just wait for head shots on both targets, rather than risk hitting the no-shoots that quickly covered the targets.

Stage 4 was the Classifier, CM 03-10 "Riverdale Standards." The stage challenged strong and weak hand shooting, as well as speedy reloads. That's enough said about this one. :-)

"Topsy Turvy," brought out another tricky prop in Fredericksburg's arsenal, the hanging handles. At both ends of a long wall metal handles were attached. A Pepper Popper and a single paper target were placed at each end of the course. The fault lines were set far back from the end of the wall, so the shooter had to hang onto the handle with one hand, and hang way out, engaging those end targets single-handed. As if that wasn't challenging enough, hitting the falling steel, opened a port in the wall at the opposite end of the wall, through which additional targets were engaged. This meant the shooter, starting at either end, had to make a return trip to hit the targets through the now opened port near his starting point. It's not too often you are forced to shoot both strong hand and week hand only on a field course. 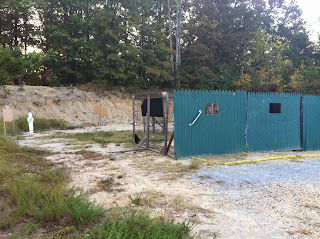 The last stage our squad shot was called "Twist and Shout." There was a drop turner on this course of fire, though while not exceptionally quick to start moving after the activator was hit, was exposed only a short time and was only partially visible from where its activator was hit. The target was also visible later from another part of the stage, and many shooters took advantage of that, even though it added some extra time and extra shots later. The stage also featured a small round plate, that could be hit from two places, neither of which were very close, nor wide open.

I was pretty happy with how I shot most of the stages, as far as planning goes, and even my hits on the most challenging targets. I had too many misses on some fairly easy targets. In looking back on the match, it seems that most of those missed shots were on entering or leaving a shooting position. (And I believe I've noted this weakness previously.) I need to work on getting settled upon entering a new shooting position, and especially, take care not to pull off too soon when preparing to exit a position. (Patience has never been one of my stronger virtues.)

Overall, this was a technically challenging match. There were long, tight shots and plenty of moving targets. Many of the stages required some serious thought to come up with a shooting plan, and then to execute it well. Of course, it wouldn't be enjoyable without fun folks to shoot it with as well. We had a great squad and everyone seemed to be enjoying themselves, even when their plan didn't go as well as hoped. I came home tired, dusty, and a little bit sunburned. But I couldn't have hoped for a more enjoyable day.